The ability to pattern conductive electrodes is technologically relevant for several applications, including photovolatics,1 displays,2 sensors,3 and biomedical devices.4 Conductive silver electrodes are ubiquitous in such applications due to their high conductivity and oxidation resistance. Silver particle inks are widely used; however, they often require complicated synthesis routes,5 relatively high polymer concentrations,6 and must be annealed at high temperatures that are incompatible with most organic substrates. To overcome these limitations, silver precursor inks have been introduced that can be readily synthesized and exhibit high electrical conductivity at modest annealing temperatures.7-12

Three classes of silver precursor inks have been reported to date. One type relies on decarboxylation of a counterion or a thermally degradable carbamate complex that yields conductivities within one order of magnitude of bulk silver.8 Another type relies on thermal activation of reducing agents above a threshold temperature.9 Both of these inks require annealing temperatures in excess of 120 °C to achieve appreciable conductivity. Recently, we introduced a new type of ink, referred to as a reactive silver ink.10 This ink was prepared by a modified Tollens’ reagent synthesis using silver acetate, formic acid, and ammonia. While this ink exhibited high conductivity at temperatures as low as 90 °C, one drawback of this initial chemistry is significant gas evolution, i.e., bubble formation, that occurs during annealing. Another limitation arises from its low viscosity (2 mPa∙s) and high surface tension (>60 mN/m), which makes inkjet printing quite challenging.

Inks designed for inkjet printing must meet stringent physical property requirements. The Ohnesorge (Oh) number (a dimensionless number that relates viscous forces to inertial and surface tension forces) must be within certain values for reliable jetting. Oh is given by:

where We is the Weber number and Re is the Reynolds number.11 A value of 0.1 to 1 is generally accepted to be in the range of stable droplet formation. Derby11 further reported that the minimum velocity (υmin) required to generate droplets is given by

where, γ, ρ, and dn are the surface tension, density, and nozzle diameter, respectively. This minimum droplet velocity was difficult to obtain using the original silver reactive ink at the excitation voltages (<40 V) available on typical inkjet printing machines due to its low viscosity and high surface tension.

Here, we report a modified reactive silver ink (Product No. 745707) that incorporates a primary amine for optimized jetting. In its synthetic procedure, silver acetate is dissolved in an aqueous solution mixture of primary amine, propylene glycol, and other humectants. Formic acid (or ammonium formate) is then added to the resultant solution in an icecooled water bath, followed by syringe filtering by pore size of 0.2 μM. Figure 1A shows the particle-free ink after synthesis. Unlike the clear ink formed without a primary amine, the modified ink appears slightly yellow due to the presence of the Ag-amine complex (Figure 1B). The UV-Vis spectrum shows the absorption in the region of 400–425 nm, indicating the reaction of silver and primary amine with formic acid (Figure 1C). This ink is relatively stable at room temperature and does not rapidly form silver particles until heated to
50–60 °C. Figure 1D shows the thermogravimetric analysis (TGA) data for inks heated at 80 °C, 100 °C, and 120 °C as a function of annealing time. These curves show that the ink contains approximately 13 wt% silver. Notably, the volatile constituents are completely removed within a few minutes at 120 °C, and bubble formation is not observed during annealing. Figure 1.A) Image of the modified reactive Ag ink composed of 13 wt% solids. B) Illustration of the key ink constituents. C) UV-vis absorption of the ink. D) Thermogravimetric analysis of the ink measured at varying temperatures as a function of annealing time.

The viscosity of the modified reactive silver ink is 10 mPa∙s, which represents a five-fold increase relative to the original ink formulation.10 Furthermore, by incorporating alkyl amines with bulkier side groups, the ink viscosity and surface tension can be systematically tuned over a broad range from 5–50 mPa∙s and 20–50 mN/m, respectively. This tunability enables our modified reactive silver inks to be formulated for myriad patterning techniques, including inkjet, spin-coating, aerosol, electrohydrodynamic jet, and roll-to-roll printing.

The time sequence of droplet formation achieved during inkjet printing using a Fuji Dimatix printer equipped with a 10 pL cartridge is shown in Figure 2A. The waveform and excitation voltage are selected to minimize the formation of satellite droplets, which diminish pattern fidelity. Figures 2B and C show optical and SEM images of the silver electrodes patterned on a cellulose acetate substrate with a range of line widths from 80 μM to 1.5 cm. By carefully choosing the appropriate alkylamine ligands, the modified reactive silver ink exhibits low surface tension, increased adhesion, and negligible bubble formation without the use of polymeric additives. Figure 2. A) Image of droplet formation from a 10 pL cartridge with a 10 μsec interval between images. B) Image of conductive pattern produced on cellulose acetate after a single pass annealed at 100 °C for 2 min. C) Micrographs of the smallest lines (70 μm top, 110 μm middle, 180 μm bottom) produced in B).

Microstructural evolution as a function of the number of printed layers is illustrated in Figure 3A. Single-pass, printed features are porous, conductive (~10% of bulk silver), and translucent. Their electrical conductivity increases by approximately 20% per pass, such that fivelayer printed features exhibit nearly bulk conductivity (Figure 3B). The layer height remains relatively unchanged with an increasing number of passes (up to five passes). The SEM images reveal that as additional ink is deposited per pass, the patterned electrode structures densify as the excess silver fills in the underlying pores in a given area. After five layers have been deposited, the film height increases by approximately 350 nm. Hence, the layer height only grows after the porosity present within the patterned electrode features has been filled. By contrast, printed electrodes produced from silver nanoparticle inks remain porous even upon deposition of subsequent layers. 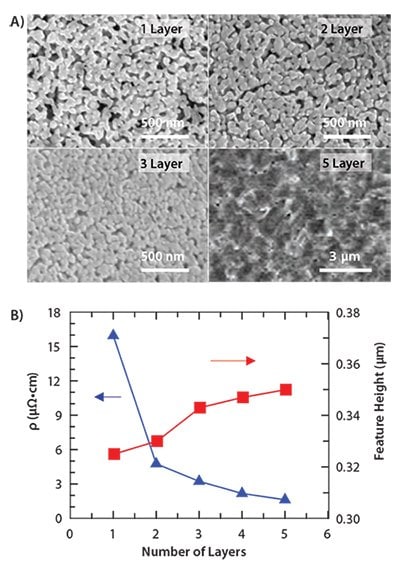 Because the single-layer silver electrodes are fairly conductive, we printed single-layer grid patterns (25 mm × 25 mm, line width = 80 μM) with a line spacing of 0.5 mm onto a poly(ethyleneterepthlate) (PET) substrate (Figures 4A and B). Figure 4A shows a high degree of transparency of the conductive single-layer grid; the text underneath is clearly visible through the printed grid. Figure 4C shows the transmittance of grid patterns deposited of varying line spacing of 0.5, 1.0, and 2.0 mm, respectively. At a grid spacing of 2 mm, a transmittance of above 90% was achieved.12 The patterns were produced with a single drop-width, both horizontally and vertically, showing the ability of this modified reactive silver ink to be reliably jetted as well as wet and maintain high-fidelity patterned features on low-cost plastic substrates. Figure 4.A) Optical and B) SEM images of transparent conductive square (25 mm × 25 mm) grid with 0.5 mm spacing between 80 μM features inkjet-printed on PET film. C) UV-Vis transmittance of conductive grids as a function of grid spacing.

We have shown that by modifying reactive silver ink with the appropriate alkylamine ligand(s), we can vastly improve its ability to be patterned by inkjet printing without compromising the electrical performance at modest annealing temperatures (<120 °C). Because its viscosity and surface tension can be tailored over a broad range to facilitate multiple patterning approaches, this modified reactive silver ink opens new opportunities for printed electronics.

This work was supported Office of Naval Research for financial support through the Multi-University Research Initiative (MURI Award N00014-11- 1-0690). We gratefully acknowledge the use of facilities at the Frederick Seitz MRL Center for Microanalysis of Materials at the University of Illinois at Urbana-Champaign.