Self-Assembly: From Nature to The Lab

In the 1980’s, scientists discovered that alkanethiols spontaneously assembled on noble metals. This new area of science opened the doors to a simple way of creating surfaces of virtually any desired chemistry by placing a gold substrate into a millimolar solution of an alkanethiol in ethanol. This results in crystalline-like monolayers formed on the metal surface, called self-assembled monolayers (SAMs).1

Over the years, the mechanism of the self-assembly process has been well studied and elucidated. Researchers have found that a typical alkanethiol monolayer forms a (√3 × √3)R30° structure2 on gold with the thiol chains tilted approximately 30 degrees from the surface normal.3–6 The exact structure of the monolayer depends on the chemistry of the chain.

Self-assembly forms the basis for many natural processes including protein folding, DNA transcribing and hybridization, and the formation of cell membranes. The process of selfassembly in nature is governed by inter- and intra-molecular forces that drive the molecules into a stable, low energy state. These forces include hydrogen bonding, electrostatic interactions, hydrophobic interactions, and van der Waals forces.

As with self-assembly in nature, there are several driving forces for the assembly of alkanethiols onto noble metal surfaces. The first is the affinity of sulfur for the gold surface. Researchers have found that the sulfur-gold interaction is on the order of 45 kcal/mol,3 forming a stable, semi-covalent bond; in comparison, the C—C bond strength is ~83 kcal/mol.

A simple alkanethiol molecule is shown in Figure 1. An alkanethiol can be thought of as containing 3 parts: a sulfur binding group for attachment to a noble metal surface, a spacer chain (typically made up of methylene groups, (CH2)n), and a functional head group. As mentioned above, the sulfur atom and the carbons in the methylene groups act as the main driving forces for assembly of the alkanethiols. The head group then provides a platform where any desired group can be used to produce surfaces of effectively any type of chemistry. 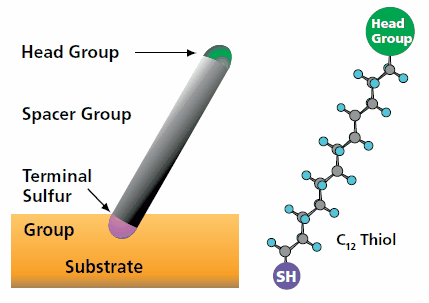 The sulfur group links the molecule to the gold surface. The head group can be designed to provide virtually any surface chemistry, binding capacity, or property.

SAMs are typically made from a 1 mM solution of the desired alkanethiol in ethanol. Initial monolayer formation is very fast, with monolayer coverage being achieved within seconds to minutes. This initially formed monolayer is not well ordered and contains many gauche defects within the chains. Over time, the layers become more ordered and well packed. Reported assembly times vary throughout the literature, but typically are 12 hours to 2 days.

The formation of a well-assembled monolayer can depend on the purity of the alkanethiol being used. The presence of even low levels of contaminants can result in a disordered, nonideal monolayer. Many typical impurities in thiol compounds are thiolated precursor molecules that were not separated during the purification process. These precursor molecules can either be straight chain alkanethiols that lack the head groups of the final product, or they can be molecules used to introduce the thiol functional group to a precursor molecule (such as thioacetic acid). Since these compounds also contain thiol functionalities, they can compete with the alkanethiol of interest for available surface locations. Competitive adsorption can be particularly problematic for alkanethiols with complex or bulky head groups. Bulky head groups can reduce the driving force for assembly by disrupting the close packed arrangement of the alkane chains. With this reduced driving force for assembly, the straight chain or small thiol contaminants can out-compete the alkanethiol of interest on the surface.

These effects were noticed in early alkanethiol self-assembly research and several detailed studies were performed on the preferential adsorption of one alkanethiol versus another. Adsorption from a dilute solution in ethanol of a mixture of two alkanethiols, one with a polar the other with a nonpolar head group, showed that adsorption of the alkanethiol with the nonpolar head group was favored.7 Bain et al. also noticed that alkanethiols with equivalent head groups, but longer chains adsorbed preferentially over shorter alkanethiols. 4When one tries to intentionally obtain a mixed monolayer, where two or more head groups are present at a desired ratio, it is very difficult to predict the relative surface concentration from the solution concentration and a calibration curve is typically necessary.4 An example is given by Nelson et al., who studied mixed monolayers of biotinylated alkanethiol mixed with either mercaptohexadecane or (1-mercapto-11-undecyl)tetra(ethylene glycol) and correlated the solution concentration to the surface concentration using electron spectroscopy for chemical analysis (ESCA) and Time-of- Flight Secondary Mass Spectrometry (ToF-SIMS).8 This study demonstrated how the surface and solution composition in mixed monolayers can vary significantly and why a calibration curve is necessary when engineering mixed monolayer surfaces.

As a demonstration of the effects of thiol impurities in SAM formation, Table 1 shows ESCA surface composition data from a series of SAMs prepared from thiol solutions that were purposely spiked with “impurities”. For this experiment, solutions of (1-mercapto-11-undecyl)tetra(ethylene glycol) (PEG4 thiol, Prod. No. 674508) were mixed with 0%, 1% and 10% (v/v) thioacetic acid (TAA). All monolayers were prepared from 1 mM solutions in absolute ethanol. The percentages shown for the various thiol components are volume percentages. 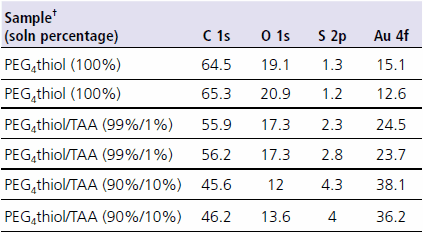 Table 1. ESCA composition data from PEG4 thiol monolayers with and without “impurities”. All data is shown in atomic percent. Two analysis spots are shown for each sample. †PEG4 thiol = (1-mercapto-11-undecyl)tetra(ethylene glycol); Prod. No.674508 TAA = thioacetic acid

Table 2 shows the data from Table 1 rescaled without the gold signal. This allows comparison of the atomic percentages with that expected based on the solution mixture atomic composition. As seen in Table 2, the experimental values compare well with the calculated values. The atomic percentage of sulfur is typically observed to be lower than expected due to attenuation by the overlying monolayer. This is the case for the 100% PEG4thiol. The fact that the sulfur data from the other two monolayers is close to the predicted numbers, suggests that the layers are disordered (consistent with the gold atomic percentages) or that there is a high amount of thioacetic acid on the surface (which has a high relative percentage of sulfur vs. the other atoms). 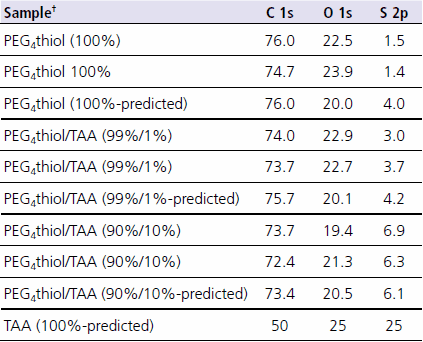 Table 2. ESCA composition data from PEG4 thiol monolayers with and without “impurities” rescaled without gold signal.All data is shown in atomic percent. Two analysis spots are shown for each sample. The values in bold are the calculated atomic percentages based on the solution mixture ratio of the compounds used. †PEG4 thiol = (1-mercapto-11-undecyl)tetra(ethylene glycol); Prod. No.674508 TAA = thioacetic acid

It is interesting to note that when looking at Table 2, one might think that since the relative percentages of carbon and oxygen do not change significantly from sample to sample, that the surfaces are still pure PEG4 thiol. It is only the high percentage of sulfur that sets the samples apart and indicates that an impurity is likely present.

Overall, this data demonstrates that even small amounts of contaminants in a solution can cause significant differences in the monolayer composition and structure. The best way to avoid these problems is to use molecules with the highest possible purities.

Results similar to these were seen when thioacetic acid was present in PEG3 and PEG6 thiol samples. Both of these samples showed a higher than expected gold and sulfur signals indicating the layers were disordered and a sulfur contaminant was present. The most important property of poly(ethylene glycol) alkanethiols (PEGn thiols) is the ability to form a nonfouling self-assembled monolayer, but the presence of just small amounts of carboxylic acid-terminated PEGn thiols (possibly introduced from poly(ethylene glycol) starting material) leads to significant protein adsorption, making the surface more fouling than bare gold itself, as shown by Roberts et al.9

The interference of thiol contamination with monolayer formation has also been reported for the assembly of thiolated DNA on gold.10 It was found that the presence of a thiol contaminant, dithiothreitol, impeded the assembly of the thiolated DNA onto the gold surface. The authors showed that when contaminated thiolated DNA was used for the assembly, the atomic percentages of characteristic DNA elements (P, N) did not increase with increasing assembly times as they did with purer samples. Increased assembly times instead resulted in increased amounts of the contaminant molecules on the surface. Samples prepared from relatively pure DNA showed logical trends for the DNA elements in a time series assembly.

SAMs have been used for studies and applications in many areas. A few examples include surface wetting, non-fouling property, electrochemistry, surface passivation, protein binding, DNA assembly, corrosion resistance, biological arrays, cell interactions, and molecular electronics. These and other topics have been summarized in previous review articles.11-13

SAMs have truly opened the doors toward direct surface engineering. Only the imagination limits the possibilities available to the interested researcher. Figure 2 shows schematic diagrams of several possible applications for alkanethiol monolayers. These types of applications will likely rely on high purity alkanethiols with head groups such as those listed in Table 3. 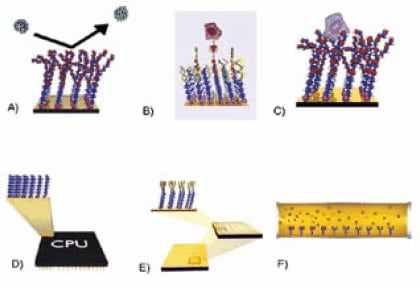 Table 3.Some head group examples useful for the applications shown in Figure 2.