Flexible electronic circuits and displays based on organic active materials are future generations of products that may eventually enter mainstream electronics market. The advantages in using organic active materials are their ease in tuning electronic and processing properties by chemical design and synthesis, low cost processing based on low temperature processes and reel-to-reel printing methods, mechanical flexibility, and compatibility with flexible substrates.1

Organic thin film transistors (OTFTs) are the basic building blocks for flexible integrated circuits and displays. A schematic structure is shown in Figure 1.2 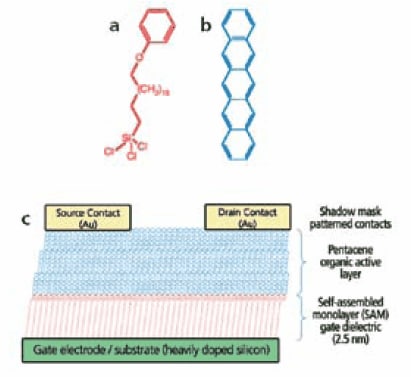 During the operation of the transistor, a gate electrode is used to control the current flow between the drain and source electrodes. Typically, a higher applied gate voltage leads to higher current flow between drain and source electrodes. A fast switching transistor should have a high charge carrier mobility and a high on/off current ratio for the semiconductor material. For the pixel switching transistors in liquid crystal displays, mobility greater than 0.1 cm2/Vs and on/off ratio greater than 106 are needed.

Both self-assemblies and self-assembly processes play important roles in improving device performance as well as enabling low cost processing methods for the fabrication of these devices. In this article, a briefly survey is given on the applications of self-assembly in OTFTs.

Additionally, dielectric surface treatment with SAMs also affects the nucleation and growth of organic semiconductors.6 For example, pentacene is an organic semiconductor with the highest reported thin film charge carrier mobility. Its charge carrier mobility changes significantly depending on the types of hydrophobic SAM surface treatment. This difference is related to the morphological difference of the first pentacene monolayer formed on different surfaces.6

SAMs as the active dielectric or semiconductor layers 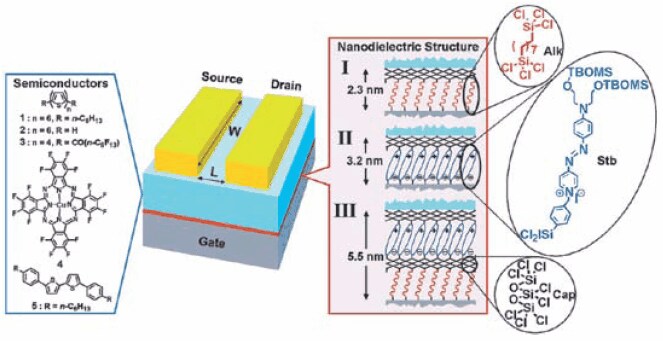 Figure 2. Schematic representation of the components of an OTFT showing the molecular structures of various organic semiconductors (left) and selfassembled nanodielectries I-III (right). Nanodielectric layers were deposited from solutions of silane precursors.

Figure 3.Modification of a gold gate electode for the surface initiated polymerization reaction to grow a dielectric layer.

To facilitate charge transport, the organic semiconductor layer usually comprises of pi-conjugated oligomers or polymers, in which the pi-pi stacking direction should ideally be along the current flow direction. This requires the semiconductor molecules to self-assemble into desirable orientation upon either vapor or solution deposition. These well-ordered molecular layers can be formed by (1) proper molecular design of chemical structures that favor crystallization into large ordered domains or (2) self-assembly into mono and multi layers.10,11 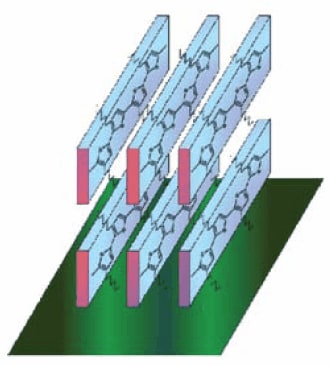 Layer-by-layer deposition is a potentially useful method for organic semiconductor deposition. It allows precise control of the layer thickness, roughness, chemical composition, and molecular orientation. This method has been used to prepare self-assembled multilayers of copper phthalocyanine derivatives. Ion-assisted doping has been observed for these devices.11

For organic transistors, the active semiconductor layer has to be patterned in order to minimize cross talk between devices. Additionally, both the drain and source electrodes need to be patterned so that they are separated by at most a few micrometers depending on application requirements.

In addition to various printing methods, such as ink-jet printing, screen printing, and offset printing,15-17 SAM modified surfaces have been used for selective deposition of organic semiconductors through patterned wettability or templated growth Figure 5.18,19 Patterned SAM layers can be patterned by conventional photolithography or microcontact printing.20 In addition to pattern organic semiconductors, patterned SAM can be used as an etch resistant layer to prevent etching of an Au film underneath a thiol SAM to generate Au electrodes.21 Patterned SAM layers have also been used to initiate electroless plating of patterned metal electrodes on plastic substrates.22 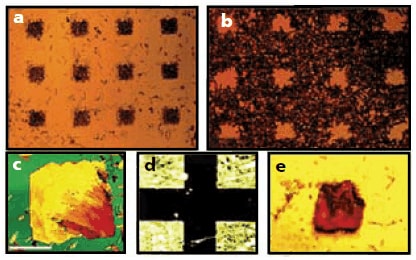 In summary, both self-assemblies and self-assembly processes are crucial as active materials as well as low cost fabrication methods for organic flexible electronic devices. Significant progress has already been made in this field. Nevertheless, as the demand for performance and precision in patterning increases, self-assembly processes will become increasingly important.