Since its introduction, REDTaq has been well received by the scientific community. The original product idea was to add convenience to PCR by formulating a reaction that also contained loading buffer and dye. The end product would allow the researcher to see which samples contained enzyme and would remove one step in post-PCR product analysis, but would not hinder any conceivable post-PCR uses for the amplified DNA. The product name, REDTaq, is meant to reflect simplicity of use to the customer; the enzyme would work like Taq polymerase in every other way, but have color. 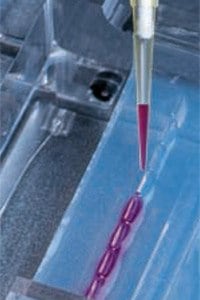 From the myriad of chromophores that could have potentially fulfilled the above objectives, one was selected to provide an amplification system that performed as well as our standard Taq DNA polymerase. Included in the screening were PCR and post-PCR concerns including PCR toxicity, PCR product purification methods, restriction digests, ligation, and transformation. One of the most stringent tests of the screening was PCR yield. As can be seen in Figure 1, the PCR yields with the newly formulated product are comparable to those of Taq. Additionally, PCR products from a REDTaq reaction mixture can be used in automated sequencing without causing fluorescent artifacts or hindering the sequencing reaction or length of read. An unforeseen benefit of REDTaq is that one can easily see if a reaction has been thoroughly mixed. All in all, REDTaq performs as we first envisioned. Aside from the added conveniences of visualization and direct loading, the additives have no effect on the reaction.

Compatibility of REDTaq in long and hot start PCR

Figure 1. Relative PCR product yields as a function of target sequence length using REDTaq and Taq DNA polymerases. Product yields were quantified as acid insoluble counts from [32P]dCTP containing PCRs. Yields are normalized to those of Taq DNA polymerase. Lambda phage DNA was used as a template, and reactions were performed in duplicate. Product quality was independently verified by agarose gel electrophosesis of parallelnonradioactive PCRs.

As REDTaq is essentially identical in performance with Taq, REDTaq and Taq PCR optimization are operationally identical. However, REDTaq is different from Taq in its magnesium requirements. Although methods of optimizing magnesium concentration for REDTaq and Taq will be unchanged, one should be aware that magnesium concentrations optimized for Taq may not be optimal for REDTaq, even if all other parameters (template, primers cycling conditions etc.) are the same. PCR optimization can usually be effected by changing one or more of the following (in order of importance): template quality, primer design, cycling parameters and magnesium concentrations. There are many excellent reviews covering PCR optimization,1,2 and most good technical libraries will include recent books covering general PCR techniques.3,4 Most troublesome PCR can be made to work by changing one or more of the parameters described previously. However, this is far from a general method for PCR optimization. If template quality is sufficient, then the problem is often due to the complexities involved in PCR annealing, which is a function of the melting temperature (Tm). Tm is the temperature at which the annealing and dissociation rates of the primer: template complex are equal.

Dissociation is unimolecular and therefore independent of concentration, while annealing is bimolecular and dependent on PCR product and primer concentrations. To put it simply, Tm values change during PCR. One technique, which allows a certain amount of error in Tm calculation, is ‘Touchdown’ PCR. 5 In this method, the annealing temperature is set five to ten degrees above the calculated Tm. Annealing temperatures of subsequent cycles are slowly dropped over the course of cycling. Touchdown PCR forces the initial amplification steps to occur at the most stringent annealing conditions possible, with subsequent, less stringent amplification relying on the mass action of the correct amplicon to outcompete any side products. This strategy is useful in that it is a ubiquitous means to get amplification. It is worth trying after a positive control experiment has demonstrated there are no PCR reagent problems.

Figure 3. Amplification of large fragments from human genomic and lambda DNAs. Lanes 1-3, JumpStart REDAccuTaq LA amplification of 5, 10 and 20 kb fragments from human genomic DNA; lane 4, 20 kb lambda DNA amplification. Lanes 5-8 are the same as 1-4 except using a competitor’s long and accurate enzyme blend. Markers in lane 9 at 10, 8, 6, 5, 4, 3, 2.5, 2, 1.5, and 1.0 kb (1 kb ladder). Reactions were assembled and then incubated at room temperature for two hours before being subjected to identical cycling conditions.

REDTaq DNA polymerase with its optimized reaction buffer performs identically and can directly replace Taq DNA polymerase in most applications. The exception to this is with troublesome PCR. The difference becomes a concern when using non-standard magnesium concentrations.