In the past 100 years, cell culture has evolved from a laboratory curiosity into a valuable and widely used research and bioproduction tool. During this time, the surfaces used for growing cells has also evolved as the needs of researchers have changed. From Ross Harrison’s pioneering frog cultures in 1907 through the 1940s most cells were grown as explant cultures on plasma clots either in hanging drop cultures or on the bottom of PYREX® glass flasks and Petri dishes. By the mid 1950s, the availability of two cell lines, mouse L cells (1943) and human HeLa cells (1951), as well as the initial use of trypsin for subculturing cells into single cell suspensions led to most cells being grown as monolayer cultures in glass flasks and dishes. In 1954, researchers at Connaught Medical Research Laboratories in Toronto cultured monkey kidney cells in 5L PYREX Povitsky flasks to grow the virus for Jonas Salk’s successful polio virus vaccine. This was the first use of cell culture to manufacture commercial product. These breakthroughs, along with the development of modern synthetic cell culture media, such as M199 (1950, used for the polio vaccine project) and Eagle’s widely used Minimum Essential Medium (1959), began a dramatic rise in the use of cell culture as both research and production tools.

Many cells, however, especially primary cell cultures, had difficulty attaching to glass, so in 1956 George Gey used rat tail collagen to coat glass surfaces to improve cell attachment and growth. In addition, glass culture vessels require very careful cleaning procedures to ensure detergent residues do not interfere with these and other cellular processes. As a result, researchers began experimenting with disposable plastic culture vessels, including the first microplates. By the 1960s, plastic flasks, dishes, and 96 well plates were all available commercially. Most of these vessels were manufactured from polystyrene, a long carbon chain polymer with benzene rings attached to every other carbon. Polystyrene was chosen because it has excellent optical clarity, is easy to mold, and can be sterilized by irradiation. However, it also has one significant drawback: it is a very hydrophobic (nonwettable) polymer to which cells have difficulty attaching. For good cell attachment the hydrophobic polystyrene surface must be modified to a more hydrophilic surface. This allows cell attachment proteins (vitronectin and fibronectin) found in the serum containing culture medium to adhere and spread on the vessel bottom, thus providing a better surface for cells to attach. The freshly molded polystyrene surface is treated using either corona discharge under atmospheric conditions or gas-plasma under vacuum. These processes both generate highly energetic oxygen ions which oxidize and graft onto the surface polystyrene chains (Figure 1) so that the surface becomes hydrophilic and negatively charged once medium is added.1-4 By the mid 1970s most researchers were growing their cell cultures in treated polystyrene vessels rather than glass. 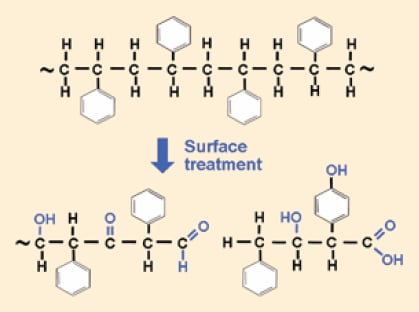 Figure 1.Polystyrene can be surface modified by the addition of a variety of different chemical groups, breaking the carbon chain backbone or opening the benzene ring (not shown).

By the end of the 1970s, researchers were finding that even treated polystyrene had its limitations, especially for growing cells in serum-free media and for maintaining differentiated cell functions in primary cultures and cell lines. At the same time, researchers were experimenting with basement membrane extracts and purified attachment proteins to better understand their roles in cell attachment, migration and function.5 As a result of this work, some cell researchers began coating culture vessel surfaces to improve both cell attachment and performance. They used a variety of biological materials, including extracellular matrix, attachment and adhesion proteins, such as collagen, laminin, and fibronectin as well as mucopolysaccharides, such as heparin sulfate, hyaluronidate, and chondroitin sulfate, both individually and as mixtures. Use of basic synthetic polymers, such as poly-D-lysine (PDL), as coatings have also been used to create a positive charge on polystyrene which, for some cell types, can enhance cell attachment, growth, and differentiation, especially in serum-free and low serum conditions. PDL coatings often improve attachment and growth of primary neurons, glial cells, neuroblastomas, and a variety of transfected cell lines. PDL coating are also used in cell-based microplate assays to help keep cells attached to the bottom of the wells during processing.

Because biological coatings are expensive, show batch-to-batch variability, and carry the potential risk of transmitting dangerous biological agents, the Corning® CellBIND® culture surface was introduced in 2003 to improve cell attachment under difficult conditions, such as adapting cells to serum-free medium or recovery of frozen cells. Developed by Corning scientists, this patented treatment process (U.S. Patent 6,617,152) uses a higher energy microwave plasma to incorporate more oxygen onto the polystyrene surface rendering it more hydrophilic (wettable) while increasing the stability of the surface compared with traditional plasma or corona discharge treated surfaces.

Good cell attachment is especially important during recovery of cells from frozen cultures, as poor attachment can lead to apoptosis and necrosis of unattached cells and result in slower culture recovery and lost research time. This is demonstrated in (Figure 2) in an experiment using LNCaP cells, a prostate cancer cell line which is often difficult to culture because of its poor attachment properties. By improving cell attachment following thawing, the Corning® CellBIND® surface significantly improved the attachment and the yield of LNCaP cells from liquid nitrogen storage.7

Because of their 2-D nature, traditional polystyrene and glass surfaces, even when coated with biological materials, are often not satisfactory for promoting in vitro cell functions, such as transport or differentiation, that are done in a 3-D environment in vivo. To overcome these limitations, Corning, working together with Donaldson Co. and Surmodics, Inc. has recently introduced the new Ultra-Web® synthetic nanofiber surfaces that offer cells a more in vivo-like 3-D fibrillar topography that can improve their performance and functionality (Figure 3). These surfaces, unlike biological coatings, are more stable, more consistent lot to lot, and animal component-free. They can also provide an ideal substrate to which researchers can link cell attachment and growth factors for creating more in vivo-like culture micro-environments.8 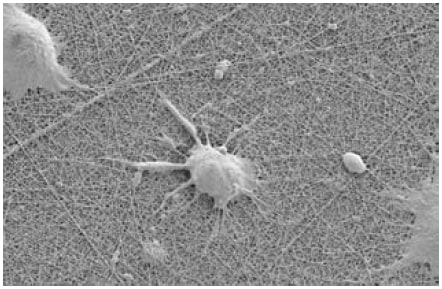 Figure 3.NG108 neuronal cells growing on an Ultra-Web nanofiber surface. This surface is similar to collagen and other ECM surfaces, but is totally synthetic. Due to the small size of its pores, cells grow on the surface rather than in it.

Ultra-Web® surfaces have been successfully used for growing a variety of cell types, including liver, kidney, neuronal and stem cells.8-10 This new synthetic surface has been tested in a variety of cell-based assays including cell-based luminescence-reporter gene and FLIPR calcium flux assays. Because cells grow on the Ultra- Web surface they are easy to view, when stained, (Figure 4) and cells are able to be harvested using standard methods.

Hepatocyte cultures do especially well on Ultra-Web® surfaces.10 Human primary hepatocytes showed equivalent production of albumin over a 10 day period when compared to collagen I, IV, laminin, and enhanced production over uncoated TCT microplates (Data not shown). Using a fluorescent based assay, these hepatocytes also showed enhanced cytochrome P450 (CYP1A2) activity compared to the hepatocytes cultured on microplates coated with collagen or a collagen sandwich (Figure 5). CYP1A2 activity was induced for three days with 50μM omeprazole and the media replaced with 10μM of the fluorescent substrate Ethoxyresorufin and the fluorescence measured. Hepatocytes cultured on the Ultra- Web® and Ultra-Web® polyamine microplate surfaces demonstrated both raw P-450 activity (blue bars) and fold induction (blue line) of Cyp1A2 nearly two times that of collagen and similar to that of Matrigel. Thus the synthetic Ultra-Web® surfaces provide an alternative means of culturing cells on a three-dimensional surface without any of the issues associated with biological coatings. 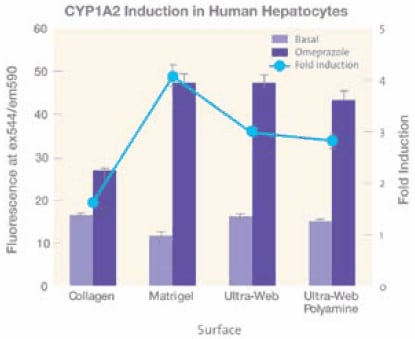 Figure 5.Effects of four different cell culture surfaces, collagen I and Matrigel™ (BD), Ultra-Web and Ultra-Web polyamine surface (Corning) on CYP1A2 activity in human primary hepatocytes. The Ultra-Web surfaces out perform collagen and are similar to Matrigel but with higher basal activity.

Sometimes researchers want to culture cells where preventing cell attachment to culture surfaces is an advantage. Untreated polystyrene culture vessels are often tried first in the hope that their hydrophobic surface will prevent cell attachment. However, in part due to their sterilization by irradiation, these untreated vessels can still bind attachment proteins through hydrophobic interactions as well as some cell types. To reduce cell attachment as far as possible Corning® introduced Ultra-Low Attachment surface coated vessels in the 1990s. These vessels have a very hydrophilic and neutrally charged hydrogel layer that is covalently linked directly to the polystyrene surface to prevent peeling. Since cell attachment proteins and other biomolecules passively adsorb to polystyrene surfaces through either hydrophobic or ionic interactions, this hydrogel surface naturally inhibits nonspecific immobilization via these forces, thus inhibiting subsequent cell attachment. This surface is very stable, noncytotoxic and biologically inert. 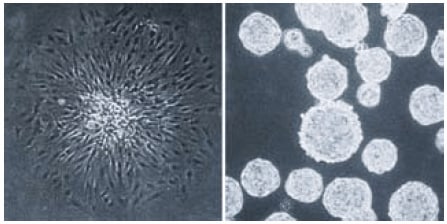