Chemical ligation strategies are widely utilized for the modification of biological macromolecules in biotechnology and medicine and for the development of functional materials. In particular, reagents that can modify the surface of proteins, typically through reactive side chains, have found broad utility. The vast majority of these studies utilize conjugation to lysine and cysteine through active esters and carbonates, or haloacetyl and maleimide groups, respectively. However, since Cys residues are infrequently located on the surface of proteins, their use typically requires mutagenesis, and the introduction of reduced Cys residues into proteins such as antibodies frequently requires complicated refolding protocols. As a result, lysine conjugation (and related N-terminal amine conjugation) remains the primary method of protein modification. The ability to chemoselectively react other side chains would be valuable both for the modification of proteins with multiple probes / labels and for a different distribution of the labeled products.

The guanidinium group of arginine is highly abundant on the surface of proteins due to its positive charge (pKa ~12). As a result, a straightforward method for synthesizing reagents to selectively and efficiently modify Arg residues would be broadly applicable to proteins. Arg residues are known to react with dicarbonyl reagents. As early as 1916, chemist Otto Diels recognized that vicinal dicarbonyl compounds (e.g., 2,3-butanedione) would selectively react with terminal amidines.1 Fifty years later, the dicarbonyl reagent phenylglyoxal was shown to modify proteins at arginine residues.2 However, these reactions simply modify the Arg residue, and the introduction of other functionality (biotin, fluorophores, PEG, drugs) has been only narrowly explored. Since the hydroxyimidazole conjugation product is hydrolytically stable, conjugation strategies based on the phenylglyoxal group would be compatible with most medical and materials applications.

One reason for the lack of phenylglyoxal conjugation reagents may be that the synthesis of more complex arginine-directed conjugates is severely hampered by the lack of commercially available bifunctional phenylglyoxal starting materials and sensitivity of the dicarbonyl group during synthetic manipulation. One readily available derivative, para-azidophenylglyoxal (APG), has been designed as a photo-crosslinking agent to establish the tertiary structure of the ribosome.3 Here, we have co-opted this reagent to participate in a copper-catalyzed azide–alkyne cycloaddition reaction.4 The high chemoselectivity of this click reaction allows the phenylgyoxal functional group to be introduced onto probe molecules in a straightforward manner. The resulting new class of triazolyl-phenylglyoxal conjugation reagents efficiently modify peptides and proteins at Arg residues, and are compatible with a wide range of labels and reactive groups5. We have added two labeling reagents to our catalog, one for adding a biotin group and the second for adding a Cy3 fluorescent dye. 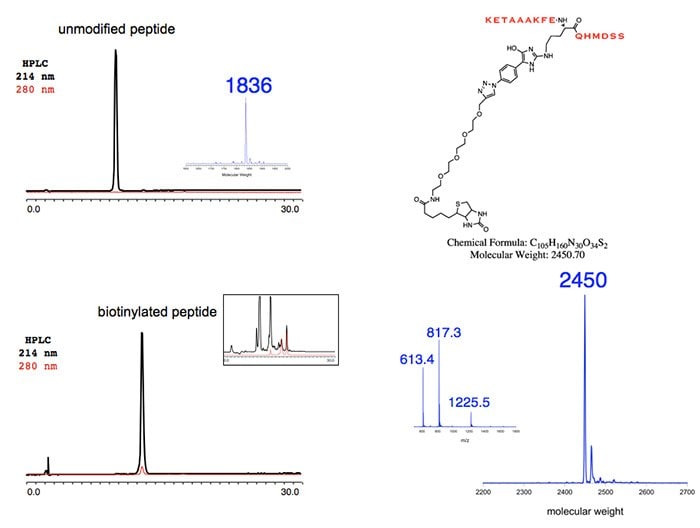 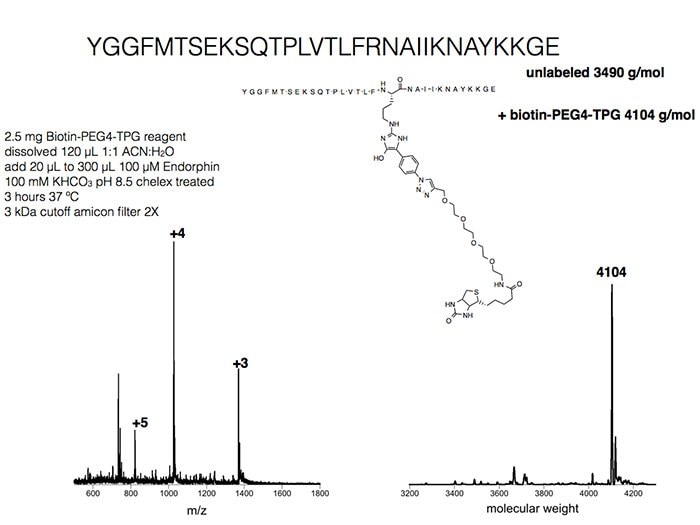 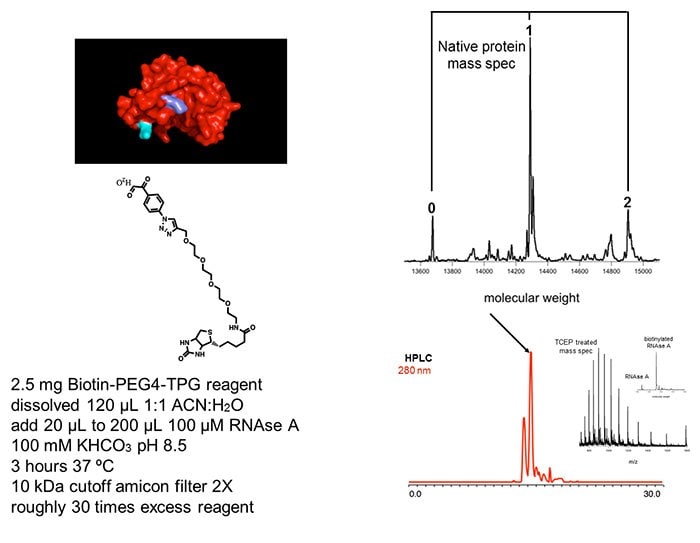