Professor Xumu Zhang at Penn State has made remarkable advances by creating a toolbox of chiral phosphines which can be used on a variety of substrates, some of which have been historically resistant to facile hydrogenation. Furthermore, an additional benefit in some reductions is reduced catalyst loading, due to increased turnover numbers (TON). Sigma-Aldrich is pleased to announce an agreement with Chiral Quest to distribute research quantities of a series of Zhang’s chiral phosphines for catalytic asymmetric hydrogenations. BINAPINE, a highly electron-donating rigid ligand, demonstrates excellent enantioselectivity and reactivity, with TON up to 10,000 for the asymmetric hydrogenation of Z-ß-aryl(ß-acylamino) acrylates (Scheme 9).7 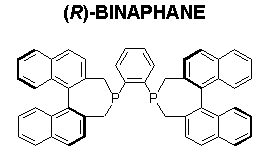