Ionic liquids, also called room temperature ionic liquids, are organic salts that are liquid at, or close to, room temperature. These salts (Figure 1) have been the subject of considerable interest due to their very low volatility and their ability to dissolve a wide variety of compounds; this combination of properties makes ionic liquids useful as “green” solvents for energy applications and industrial processes. 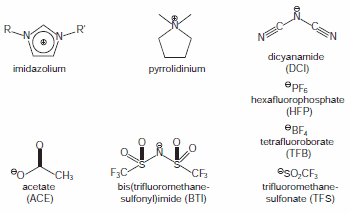 Another useful aspect of some ionic liquids is their broad window of electrochemical stability, which can be as large as 6.0 V.1 This window makes these ionic liquids promising candidates for use as electrolytes for electrochemistry. While materials with large voltage windows are desirable, they may also possess unacceptably high viscosities and insufficient conductivities for use as electrolytes. High viscosities often result in higher oxidation potentials (due to decreased mass transport rates) and longer reaction times.2 A perusal of some ionic liquid electrolytes (ILEs) shown in Table 1 quickly reveals the trade-offs.

Table 1.Properties of some ionic liquids suitable for electrochemistry

A field that has seen significant benefits from the advent of ILEs is that of electroactive polymers. Electroactive polymers (EAPs) can generally be switched between two or more stable oxidation states, giving rise to changes in properties including conductivity, color, and volume. Color changes lead to electrochromic applications such as displays and autodimmable windows, while volume changes lead to electromechanical actuator applications such as artificial muscles and microelectromechanical devices (MEMs). Devices incorporating EAPs have been the focus of concentrated research for the past three decades. As these polymers have the possibility of being switched between their neutral forms, a p-type doped oxidized form, and an n-type doped reduced form, a variety of electrode configurations are possible. This has been exemplified by the use of electroactive polymers in electrochemical capacitors,3 rechargeable storage batteries,4 and electrochromic devices.5 Figure 2 shows the common oxidation and reduction reactions that occur with EAPs.

Figure 2.Generalized reaction scheme for an electroactive polymer (P) switching between n-doped, neutral, and p-doped states in the presence of an electrolyte (C+A-)

As shown in Figure 2, the oxidation, neutralization and reduction of EAPs require the movement of ions in order to obey conservation of charge. Ion choice can affect morphology, stability, and oxidation and reduction potentials.6 Ions are introduced using electrolyte solutions such as tetraalkylammonium salts dissolved in water, acetonitrile or propylene carbonate (Prod. No. 310328). The ionic liquids shown in Figure 1 have attracted significant attention as alternative electrolytes for EAP-systems. They can be used in a pure form or in a combination with other solvents.7-9 Advantages of ILEs include a broad temperature use window, low volatility, and good electrochemical and thermal stability.10 When used without additional solvents, ionic liquid electrolytes significantly improve switching stability of EAP-based devices relative to solution based electrolytes.11

Applications of Ionic Liquids in Supercapacitors and Batteries

Electrochemical capacitors (ECs), also known as supercapacitors, are power leveling charge storage devices in which the oxidation and reduction of electroactive polymers, metal oxides, or carbonaceous materials are used to store electrical energy. In the charging process, the EC electrodes are reduced (cathode) and oxidized (anode) to store electrical energy, which is then released during discharge, as electrode materials return to their neutral states. Figure 3 illustrates the generalized operation of a Type IV EC, which combines both p-doped (anode) and n-doped (cathode) polymers for maximum energy storage. 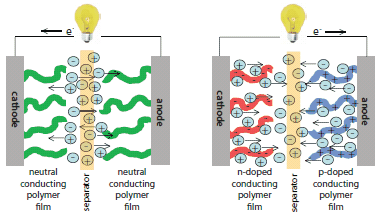 Figure 3.Electroactive polymer-based electrochemical capacitor schematic showing electron flow and ion movement during charge (left) and discharge (right). During charging, the polymer at the cathode (n-doped) becomes negatively charged, and cations from the electrolyte move in to compensate the charge. Simultaneously, the polymer at the anode (p-doped) becomes positively charged, and anions from the electrolyte move in to sompensate the charge. During discharge, both polymers return to their neutral states, and ions return to the solution.

Among the most important applications of ECs are memory protection systems for portable electronics, load leveling for electric utilities and energy storage for electric vehicles. ECs generally provide more power per unit mass than batteries and store more energy per unit mass than traditional capacitors. Therefore, they may be used to supply burst power for electric vehicles. All ECs require an electrolyte for their operation; the use of ionic liquids7,12 allows volatile and hazardous conventional solvents to be eliminated and improves the operational stability of these devices.

Li-ion batteries are ubiquitous in the consumer electronics market and may eventually dominate large-scale high power commercial energy storage. Lithium batteries are comprised of two lithium-intercalating oxide and carbon electrodes separated by an electrolyte (Figure 4). As the battery is charged, lithium ions move from the oxide electrode to the carbon electrode, storing energy. When the battery is discharged, the lithium ions move back to the oxide, and energy is released. Lithium ion transport is facilitated by an electrolyte, which typically contains a volatile, flammable solvent. Therefore, safety is a major concern in Libatteries containing conventional electrolytes. Short circuits or local overheating in the presence of flammable solvents can cause thermal runaway, fire, and even explosion. Ionic liquids can be particularly helpful in lithium ion batteries, by replacing flammable solvents and improving battery safety.10 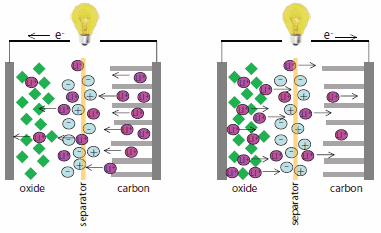 With increasing focus on energy production and storage, there is a growing demand for charge storage devices that operate at a wide variety of temperatures. In the automotive industry, charge storage devices would ideally be operational at temperatures as low as -30 °C.14 Military requirements for charge storage devices are even more severe, with temperatures as low as -60 °C targeted for some applications.15 Most batteries suffer from severe performance degradation at lower temperatures, especially down to -60 °C.16 Aside from slowing down the kinetics of the charge/discharge process, lower temperatures also increase the viscosity of electrolytes, reducing the ability of the electrolyte to transport charge. Such property changes lead to degradation of device performance or failure upon extended exposure to low temperatures. One of the most severe effects of low temperatures on solution-based electrolytes is reduced solubility of the electrolyte material, resulting in precipitation of the salt and destruction of the electrochemical capacitor or battery. As evidenced from Table 1, many ionic liquid electrolytes are operational at the moderately low temperatures required by the automotive industry, but very few of those will function at the extremely low temperatures required for military applications.17 Adding to the challenge is the fact that these electrolytes should support electrochemical processes (deposition, oxidation, reduction, device operation,15 etc.) in a variety of monomer/polymer systems across the same broad temperature interval. Unfortunately, there are only a few ILEs that remain liquid at extremely low temperatures, and their viscosities may become prohibitively high for most of the electrochemical applications. Mixtures of different ionic liquids or the use of viscosity-reducing additives could help mitigate this problem. The performance of electrochemical devices at elevated temperatures up to 60 °C has also been of concern in the energy storage industry.14 Unfortunately, most solvent-based electrolytes suffer from high solvent volatility at elevated temperatures. Solvent evaporation can result in fire and explosion in sealed systems; while in open systems, it may result in electrolyte precipitation, destruction of the charge storage materials, and loss of charge storage capability. Thus, the extremely low volatility of ionic liquids makes them excellent electrolytes for use at elevated temperatures.

There are many other applications for which ionic liquids show potential. Wide electrochemical windows and low vapor pressures make them advantageous for electroplating metals and semiconductors.18 Ionic liquids are also promising enabling technology for high-temperature fuel cells.19 At temperatures exceeding 100 °C, when water as a solvent is not an option, ionic liquids offer an excellent alternative to conventional aqueous proton transfer systems. Electromechanical actuators utilizing electroactive or ion exchange polymers require an electrolyte to facilitate actuation; ionic liquids have been shown to enhance long term stability of these devices.20 Perhaps the most prominent illustration of stability enhancement using ionic liquids are electrochromic devices, where no significant loss in electroactivity could be observed after 1,000,000 cycles when 1-butyl-3-methyl imidazolium tetrafluoroborate (Prod. No. 711748) was used as the electrolyte in a polyaniline-based electrochromic display.10

Purity of the electrolytes used in energy storage applications is crucial for the stability and performance of electrochemical devices. Ionic liquids are no exception. Depending on the synthetic routes employed for the preparation of ionic liquids, impurities in these materials may include water, superfluous cations or anions, or other solvents. Even trace amounts of contaminants can result in undesirable side reactions and hamper the performance of EAP-based devices. Thus, chloride and water impurities have been shown to influence the viscosity of ionic liquids.21, 22 Small amounts (a few ppm) of sorbents such as alumina and silica can also result in their reduced electrochemical performance.23 Purification approaches that produce ionic liquids suitable for use in electrochemistry often involve column chromatography or vacuum distillation (to remove volatile impurities; the ionic liquids themselves do not distill). They have been published for many common materials and should be followed diligently.21-23

The views presented are those of the authors and do not necessarily represent the views of DoD or its components.