HomeNanoparticle & Microparticle SynthesisChemistry in Flames: From Oxide to Salt and Metal Nanoparticles

Chemistry in Flames: From Oxide to Salt and Metal Nanoparticles

How to Make Nanoparticles in Flames

Small-scale materials with particle diameters in the nanometer range have already been used for a long time. The Chinese used carbon black, derived from a combustion process for painting applications a long time before modern technology allowed its industrial production. Besides changing optical properties as described in the above example, nanoparticles can alter physical, optical, electronic or chemical properties of a material by decreasing the particle size. Gold, for instance, is well known for its chemical inertness. Haruta and coworkers showed in the late 80’s that even gold becomes a highly active catalyst for CO and H2 oxidation, if the gold particles are in the nanometer range (Prod. No 636347).1 In the past decades there have been thousands of scientific publications covering this area. Due to their changed properties and enhanced reactivity the number of publications discussing nanoparticles has grown exponentially.

There are manifold ways to increase surface area by decreasing the particle size of materials. Generally speaking, there are two approaches toward the synthesis of nanosized materials: Top-down approaches such as milling have been known and applied within living memory. Modern milling techniques like ball milling are generally straightforward and can yield nanoparticulate materials. Bottom-up techniques include plasma, laser, liquid phase or flame spray synthesis. These “self-assembly” preparation methods generally result in well controlled nanoparticles which are built from smaller building blocks allowing the synthesis of more complex materials or the fabrication of nanoparticles with a very narrow size distribution.

In spite of the often cited novelty of nanomaterials, three large scale commodities have been around for half a century. Largescale production of these materials started in the early 20th century with the introduction of nanoparticulate carbon black (tire soot) into car tires and rubber. For the large-scale production of silica and pigmentary titania (white pigment) flame technology was further adapted. Both processes are based on the oxidation of chlorides (SiCl4/TiCl4) (Prod. Nos. 289388, 254312) in high temperature flames.2 Today, the annual production volumes of flame derived nanoparticles has reached several megatons per year. Major chemical companies have contributed significantly to an efficient process design. Unfortunately, the technology of metal chloride oxidation is only suitable for a very limited set of elements (silicon, aluminum, titanium, vanadium and zirconium). For all other elements—including most mixed element systems—other solutions had to be found. This handicap was overcome initially by Zachariah and Huzarewicz3 as well as Matsoukas and Friedlander4 by the use of aqueous precursors. Further optimizations lead to the use of organic precursors like metal alkoxides,5 acetates,6 triethanolamines,7 and metal carboxylates.8 The latter is most promising as nearly all elements are available as low-cost naphthenate - metal salts. Further, these metal-organic salts are quite stable in air, tolerate humidity and are freely miscible amongst each other. This allows the fabrication of mixed-oxide materials that have excellent chemical homogeneity9 and high batch-to-batch reproducibility (see Figure 1).

Laboratory set-ups of flame spray reactors usually operate in the region of 10-100 g/hr (see Figure 2) and small pilot plants were shown to be capable of production rates of 1 kg/hr.10 Today, by the use of liquid organic precursors, the aerosol community has gained access to most oxide materials, and these have been explored for applications in heterogeneous catalysis,9,11,12 sensors,13 lasing materials,7 computer chip manufacturing and numerous other industrial sectors.

Figure 2.Depending on the metal loading the flames during the production of inorganic nanoparticles show different colors. Illustrated in this example is the combustion of metalorganic precursors containing copper, strontium, cerium and bismuth (from left to right).

Expansion to Salts and Metals: A Quantum Leap

By studying the chemical problems of the synthesis of complex inorganic materials in flame reactors, the range of accessible products can be successfully extended from oxides to most inorganic salts14 (see Scheme 1). Loher et al. demonstrated the use of a flame as a chemical reactor and that chemical reactions, usually performed in solid-state, can be adapted for the flame synthesis of nanoparticles. As a result of these advances, a number of everyday materials have become available in the form of nanoparticles, examples include: nano-gypsum,15 nano-salt16 and nano-tricalcium phosphate (Prod. No. 693898).14,17,18 The latter has been incorporated in a number of biomedical materials and first in vivo tests demonstrated their successful application as biomaterials.18 A recent, preclinical study has demonstrated the advantageous re-mineralization properties of nanobioactive glass for damaged dentin (tooth repair).19 Scheme 1.Schematic illustration of the flexibility of flame spray synthesis is illustrated in this sketch. Depending on the process parameters, it is possible to produce oxide (oxidizing atmosphere), salt (addition of a reactive anion to the precursor solution), metal (oxygen starving conditions) or carbon-coated metal nanoparticles (introduction of acetylene).

Very recently, the concept of chemical aerosol engineering in flames has been extended to the synthesis of metal nanoparticles. The requirement of oxygen for combustion naturally led to production setups under oxidizing atmospheres. This circumstance, of course, impedes the synthesis of reduced materials, such as metal nanoparticles, as these would immediately react with oxygen, water or CO2 in the flame atmosphere, forming metal oxides. To circumvent this instant oxidation of the metal nanoparticles, Grass et al. performed flame spray synthesis of a metal containing organic precursor in an oxygen-free, reducing atmosphere (See Scheme 2).20,21 This resulted in complete combustion of all oxygen present and the formation of metallic nanoparticles in the flame atmosphere.

Recently, a further synthetic step was taken to achieve controlled deposition of carbon on the metal surface of nanoparticles.22 In principle, the degree and rate of carbon deposition depends on temperature, gas composition and the metal surface. Controlled temperature profiles in the exit stream of flame reactors and additional feeding of hydrogen, carbon mono- or dioxide, methane or even acetylene provides an option to coat metals in situ with a carbon layer. Such core/shell metal/carbon materials, for example, can yield unexpected bulk properties. The suitability of 1 nm carboncoated copper particles for temperature or pressure sensing was recently demonstrated. The same material dispersed in water has been proven for use in highly sensitive humidity sensor coatings.23

Scheme 2.Reducing flame synthesis for the manufacture of metal/ceramic nanocomposite particles consisting of bismuth/ceria. The atmosphere of the flame (CO, H2, H2O, CO2, N2) is responsible for the reduction of bismuth oxide to metallic bismuth, but is not capable of reducing cerium oxide to metallic cerium (difference in reduction potential of bismuth and cerium).

One descriptive example of the flame spray technology is the development of highly active self-sterilizing polymer films. With this technology, it is possible to homogeneously deposit 1-2 nm scale silver nanoparticles on the surface of tricalcium phosphate carrier nanoparticles.24 These metal-salt composite nanoparticles can be incorporated into a plastic film (see Figure 3). Such a film containing the composite nanoparticles was shown to be up to 1000 times more efficient as a killer of bacteria such as Escherichia coli, when compared to conventional silver preparations. One decisive factor appears to be that bacteria use the calcium carrier for their metabolism. The calcium phosphate particles, 20 to 50 nanometer in size, are absorbed by the micro-organisms and the subsequent dissolution of the calcium phosphate releases thousands of silver nanoparticles which are lethal to many bacteria. The synthesis of such complex composite materials without substantial changes in process design signifies the power of flame spray synthesis. 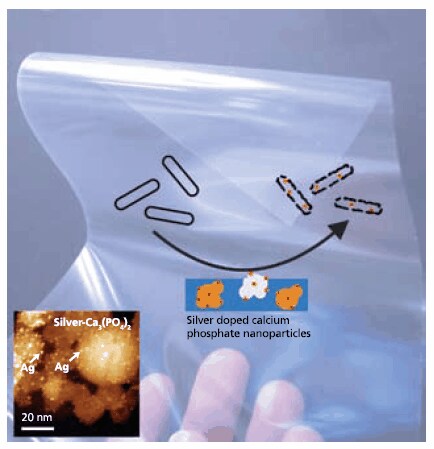 Figure 3.Composite nanoparticles with 1-2 nm silver nanoparticles homogeneously distributed on calcium phosphate carrier nanoparticles. Due to the small size and distribution on the surface of salt nanoparticles, these nanocomposites are up to 1000 times more efficient bacteria killers than conventional silver preparations.

In summary, flame spray synthesis allows the scalable fabrication of many mixed oxide, salt, metal, carbon-coated metal, silica-coated metal oxide or even metal-ceramic composite nanoparticles.25 The synthesis is based on metal loaded liquid precursors and achieves accurate control over the composition and size of the nanoparticles. High batch-to-batch reproducibility, a highly homogeneous product and a wide product variety are only a few of the useful attributes of flame spray synthesis. With this technology, there are manifold opportunities to take the developed technologies to industrial products.