TiO2 is a white pigment most commonly used due to its brightness and high refractive index. Approximately four million tons of this pigment are consumed annually worldwide. In addition, TiO2 accounts for 70% of the total production volume of pigments worldwide and is one of the top five nanoparticles (NPs) used in consumer products. TiO2 can be used in paints, coatings, plastics, papers, inks, medicines, pharmaceuticals, food products, cosmetics, and toothpaste. It can even be used as a pigment to whiten skim milk. TiO2 NPs are also found in sunscreens. In addition, TiO2 has long been a component for articulating prosthetic implants, especially for the hip and knee.

Currently, TiO2 NPs are used for their high stability, anticorrosive and photocatalytic properties, likely due to their high surface area and predominantly anatase rather than rutile polymorphs. TiO2 NPs can be used in catalytic reactions, such as semiconductor photocatalysis, in the treatment of water contaminated with hazardous industrial by-products, and in nanocrystalline solar cells as photoactive material. Industrial utilization of the photocatalytic effect of TiO2 NPs has also found its way into other applications, especially for self-cleaning and anti-fogging purposes such as self-cleaning tiles, self-cleaning windows, self-cleaning textiles, and anti-fogging car mirrors. In nanomedicine, TiO2 NPs are under investigation as valuable tools in advanced imaging and nanotherapeutics. For example, TiO2 NPs are being evaluated as potential photosensitizers for use in photodynamic therapy (PDT). In addition, these unique physical properties make TiO2 NPs ideal for use in various skin care products. Nano-preparations with TiO2 NPs are currently under investigation as novel treatments for acne vulgaris, recurrent condyloma acuminata, atopic dermatitis, hyperpigmented skin lesions, and other non-dermatologic diseases. TiO2 NPs also show antibacterial properties under UV light irradiation.

The rising global energy demand, coupled with high oil prices and increasing global warming, are factors driving research for new, renewable, environmental-friendly sources of energy. The solar cell is one potential alternative device to overcome these problems. Solar cells become a source of electrical energy through the solar energy conversion process. Some advantages of solar cells include the abundant source of solar energy, an operation that is not harmful to the environment, and easy installation even in remote areas.

Typically, solar cells have been made from crystalline silicon. The third generation of solar cells, called dye-sensitized solar cells (DSSCs), combines optical, electrical, and chemical energy. This type of solar cell can be fabricated simpler and at lower production costs. Presently, the power conversion efficiency (PCE) of DSSCs is still lower than silicon solar cells. However, much higher efficiency can be achieved: TiO2 microspheres with controlled physical and surface properties have demonstrated high solar to electric PCE in comparison to standard Degussa P25 TiO2 electrodes. Highly organized, densely packed thin films of TiO2 microspheres improve the light-harvesting and conversion efficiencies by up to 25%.

Figure 2.(A) Structure of DSSC; (B) LSV curves for the dye-sensitized solar cells. Reprinted with permission from Reference 2, MPDI 2019.

Solar radiation is a sustainable energy source that is both environmentally clean and economically viable. It is, however, a difficult challenge to efficiently convert and store solar energy. Photocatalytic H2 production by water splitting is one potential route, but only low conversion efficiencies have been reported: less than 1% quantum efficiency In0.9Ni0.1TaO4 and about 2.5% (Ga1-xZnx)(N1-xOx) solid solution at 420 nm. These efficiencies are far from the threshold target of 10% conversion of the overall solar energy. The efficiency of photocatalytic reactions, including water splitting for H2 production and the decomposition of contaminants for environmental purification, strongly depends on three factors: efficient optical absorption by the photocatalyst, efficient creation of charger carriers, and efficient use of the charge carriers in the photocatalytic processes. UV light and visible light constitute approximately 47% of solar irradiation, making the target photocatalytic efficiency greater than 10% challenging. One extensively cited study has reported that 90% of photoelectrons and photoholes recombine within 10 ns, and several other studies demonstrate that 60–80% of electrons recombine with holes on a nanosecond time scale in TiO2 colloid. This observation suggests that it would be challenging to achieve high efficiency for water splitting in TiO2 as the reactive steps would have to occur much quicker.

Figure 3.Transient absorption dynamics of TiO2(h+) after different intensity excitations in nanoseconds- TiO2 film under Ar atmosphere. (A) Excitation at 355 nm on a nanosecond time scale and (B) at 337 nm on a microsecond time scale and fitted curves, both probes at 460 nm. Reprinted with permission from Reference 3, American Chemical Society 2008.

Biomedical Applications of Nano-Titania in Theranostics and Photodynamic Therapy

Nanotechnology (NT) is prevalent in all aspects of our lives. In nature, dust particles, smoke, and ink are examples of non-biological NT.4 Bio-nanotechnology (BNT) has existed since the first signs of life on Earth. The inter- and intra-cellular transfer of nanosized biomolecules (e.g., low-density lipoproteins), neural transmission, and memory storage in biological systems are examples of BNT. Biomolecules, such as proteins, DNA, and RNA, exist at the nanoscale. Nanomaterials can be integrated with biomolecules to understand the cellular signal pathways, functional mechanisms, and cellular interactions in living cells and organisms.

Similarly, enzymes, antigens, antibodies, and ligand receptors with 2–20 nm dimensions are structurally analogous to nanomaterials and are thus vital in BNT biomedical applications. After the illumination in aqueous media with UV light, TiO2 produces an array of reactive oxygen species (ROS), Figure 4A. The capability to produce ROS and thus induce cell death has found application in photodynamic therapy (PDT) to treat a wide range of maladies, from psoriasis to cancer. Titanium dioxide NPs were studied as photosensitizing agents in the treatment of malignant tumors and photodynamic inactivation of antibiotic-resistant bacteria. Both TiO2 NPs themselves and their composites, and combinations with other molecules or biomolecules, can be successfully used as photosensitizers in PDT. Moreover, various organic compounds can be grafted on TiO2 nanoparticles, leading to hybrid materials. These nanostructures reveal increased light absorption, allowing for further use in targeted medical therapies.

Figure 4.(A) Simplified mechanism of the reactive oxygen species generated by TiO2. (B) Schematic presentation of enhanced permeability and retention (EPR) effects in tumor tissue. The nanomolecules can easily cross the blood capillary endothelial cells, whereas micromolecules can only stay in the tumor tissue due to the larger intercellular space compared to normal tissue. Reprinted with permission from Reference 4, Elsevier 2019.

Protein adsorption on nanoparticle surfaces is crucial to understanding the behavior of nanoparticles in biological systems. TiO2 based nanomaterials play an important role in biomedical applications, including medical device coating, biosensors, and drug delivery. The broad applications of TiO2 nanoparticles bring significant benefits; however, it raises concern for the potentially negative impacts on human health. Previous studies have shown that once nanoparticles are introduced into biological fluids, proteins can adsorb, and functionality changes can occur.

Furthermore, implant-associated protein adsorption and conformational changes have been shown to promote undesired immune reactions. Thus, the biocompatibility of TiO2 nanoparticles has become critically important and the evaluation of the impact that adsorption has on protein structure is of great interest. Understanding plasma protein adsorption is crucial to decipher the behavior and effects of nanoparticles in biological fluids. Protein conformation depends on nanoparticle adsorption and can change with temperature. The denaturation temperature of two plasma proteins, BSA and Fib, in dissolved and adsorbed on TiO2 (22 nm) nanoparticles were compared. Protein thermostabilities were assessed by monitoring the appearance of diagnostic intermolecular b-sheet peaks. Adsorbed BSA did not have a denaturation temperature, unlikeits solution-phase, owing to the conformational changes due to adsorption onto TiO2. Fib had a similar thermostability dependence in solution and upon adsorption. Adsorbed protein thermostability is complex and we propose it depends to a great extent on the initial interaction of the protein with the surface. Future studies should use techniques such as hydrogen-deuterium exchange mass spectrometry and/or NMR spectroscopy to better understand these interactions and the specific residues that are involved. 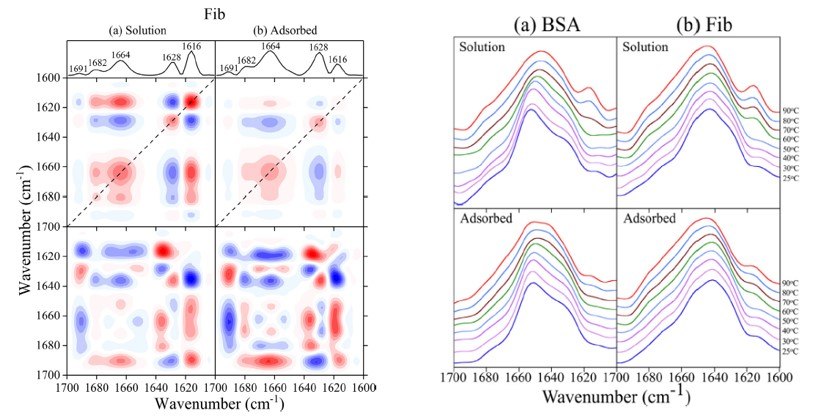 Figure 6.(A) 2DCOS maps for Fib in (a) solution and (b) adsorbed onto 22 nm TiO2 nanoparticles. Normalized intensity line trace for the dotted line in the synchronous 2DCOS and labeled amide I secondary structure peaks (top), synchronous 2DCOS (middle), asynchronous 2DCOS (bottom). Red and blue correspond to positive and negative correlations, respectively. (Color online.) (B) Normalized ATR-FTIR spectra over a temperature range of 25–90 °C for (a) solution phase BSA (top) and adsorbed BSA on TiO2 (22 nm) (bottom), (B) solution phase Fib (top), and adsorbed Fib on TiO2 (22 nm) (bottom). The spectrum of possible TiO2 nanoparticle modifications for bio-diagnostic purposes. Reprinted with permission from Reference 6, Elsevier 2019.

As the demand for longer-lasting devices increases, longer-life lithium-ion batteries have become more desirable for mobile electronics and embedded sensors. Therefore, researchers are continually trying to develop Li-Ion batteries that last longer and are environmentally friendly, light, safe, and cost-efficient.

TiO2 spherical nanoparticles, modified with carbon and used as an anode, have been shown to double the capacity of lithium-ion batteries and prolong battery lifespans before fully drained. Several research groups have discovered a new way to make lithium-ion batteries with increased lifespans using TiO2. When TiO2 is an ordered porous substrate, it can charge and discharge equivalent to many years without any drop in capacity.