The detection and quantification of biomarkers are essential for medical diagnostics, environmental monitoring, and bioresearch. This field has long been dominated by optically based readout techniques utilizing fluorescent markers or those requiring advanced spectroscopic equipment. While other fields have benefited from new technologies based upon advancements in semiconductor integrated circuit technology, chemical and biological sensors have remained dependent upon biochemical assays due to the challenges of achieving sensitivity and selectivity with semiconductor-based sensors. Silicon transistor-based readout sensors have been developed, but these devices suffered from poor sensitivity and selectivity due to fundamental shortcomings of the silicon structure.

Recently, new electronic sensors have overcome the limitations of the current silicon sensors through the development of low dimensional materials, nanowires, nanotubes, and two-dimensional (2D) films. While sensors based upon one-dimensional (1D) structures, specifically carbon nanotubes (CNTs), have demonstrated excellent sensitivity and at least the promise of selectivity, the production of devices from 1D structures has proven difficult. Graphene offers the same performance opportunities as 1D structures along with the advantages of working with a planar film.

Graphene, the first 2D atomic crystal material, is a monolayer of carbon arranged in a hexagonal lattice. Andre Geim and Konstantin Novoselov were awarded the Nobel Prize in Physics in 2010 for their groundbreaking experiments on graphene. Graphene has several exceptional material properties particularly well suited for sensor applications, including electrical conductivity.1–3 Ideal mobilities for graphene are estimated to be 200,000 cm2 V–1 s–1.4 Mobilities of 10,000–15,000 cm2 V–1 s–1 have been reported for exfoliated graphene on SiO2-covered silicon wafers,5,6 and upper limits between 40,000–70,000 cm2 V–1 s–1.6,7 Graphene is very stable; it is composed of very short, strong, covalent bonds, all in the plane of the film. The conductivity, stability, uniformity, composition, and 2D nature of graphene make it an excellent material for sensors, overcoming the failings of silicon chemical and biological sensors. 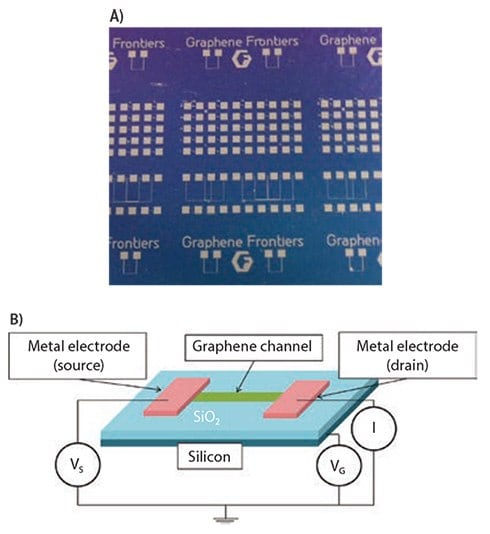 When a target molecule binds to the receptor on the graphene surface, the redistribution of electronic charge generates a change in the electric field across the FET channel region, which changes the electronic conductivity in the channel and the overall device response (Figures 2,3). Similar devices have been fabricated with silicon FETs for years, but achieved limited sensitivity and poor selectivity. Graphene generally does not react or bind with most materials; however, being composed of carbon, there are several chemistries that enable functionalization through formation of binding sites on the surface, discussed further in this section. 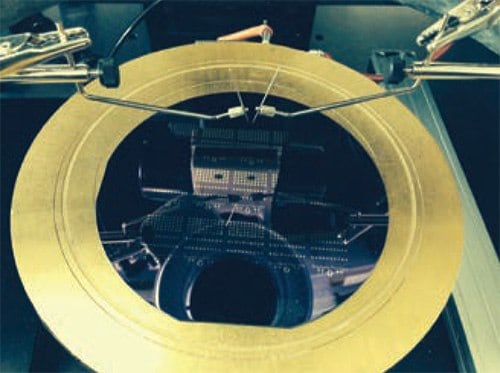 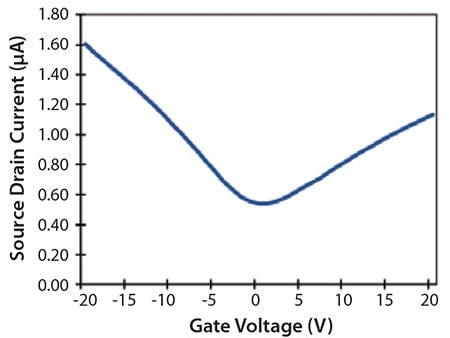 Figure 3.GFET device response as a function of gate voltage.

GFET sensors utilizing a 2D channel material have several advantages over bulk semiconductor devices (including silicon). For most semiconductor transistor sensors, local electric field changes at the channel surface have little effect deeper in the device channel, limiting the response sensitivity. With a GFET, the graphene channel is only one atom thick, meaning the entire channel is effectively on the surface and directly exposed to the environment. Any molecule attached to the surface of the channel impacts electronic transfer through the entire depth of the device. Near atomically thin silicon or other bulk semiconductors are not effective because at such a thickness, surface defects dominate the material characteristics. Two-dimensional materials, such as graphene, do not have surface dangling bonds to form defects. As a result, the graphene is highly conductive and sensitive to surface effects. Furthermore, since the material has no dangling bonds, it eliminates nonspecific binding and thus false positives, which has been an issue with other FET-based sensors. With the correct functionalization, GFETs enable highly sensitive, highly selective, direct, label-free detection of targeted analytes with an all-electronic device control and readout.

Graphene-based FET sensors have distinct fabrication advantages over devices fabricated with 1D materials, such as carbon nanotubes (CNTs) and nanowires. Like graphene, single wall CNTs are also highly conductive (with the correct chirality) and effectively all surface. Graphene can be produced in uniform films, with uniform material characteristics. Currently, 1D materials cannot be fabricated with the same consistency. Furthermore, arrays of high-yield, uniform response devices cannot be produced using randomly distributed nanowires or nanotubes because the number and orientation of the 1D objects vary across a distribution. This non-uniformity of position, often aggravated by non-uniformity of dimensions between 1D objects, creates a large variation of response characteristics between devices. 2D materials provide a route to achieve device-to-device consistency. Furthermore, uniform, wafer-scale graphene films can be formed by chemical vapor deposition, and these films are amenable to the photolithographic fabrication techniques developed for integrated circuit fabrication processes developed by the semiconductor industry.

GFETs are fabricated on silicon wafers to take advantage of the established, low-cost, highly reliable lithography, deposition, and integration processes of the integrated circuit industry. For these devices, graphene films were formed by atmospheric pressure chemical vapor deposition.8 The copper foil deposition substrate was loaded into a furnace and heated to 1,000 °C in an argon/hydrogen reducing environment to remove any native oxide on the surface of the copper. A small flow of methane was added to the gas flow. Graphene formation begins with a few nucleation sites followed by lateral growth of the single atomic layer graphene crystals until the domains meet, completely coating the copper surface. The methane breaks down at the copper surface and the adsorbed carbon atoms travel on the surface until it meets up with and adds to the graphene crystals. Continuous single atomic layer graphene (SLG) was formed after a short growth time of 5 to 30 minutes, depending primarily upon the gas flow ratio.

Metal electrodes were deposited on a silicon wafer by thermal evaporation and patterned lithographically. The thin titanium or chromium layer is necessary for adhesion to the SiO2 surface. Gold or palladium provides the electronic contact with the graphene. The graphene film was transferred from the copper deposition substrate and overlaid on the wafer after the formation of the electrodes. To perform the transfer, Poly(methyl methacrylate) (PMMA, Prod. Nos. 182230, 445746, and 182265) was spincoated on the graphene face of the copper substrate. The copper was separated from the PMMA/graphene by a mechanical separation with water electrolysis. The graphene film was placed on the wafer surface, the wafer was baked to promote adhesion of the graphene to the wafer and electrodes, and the PMMA was removed with acetone. Additional photolithography was used to pattern the graphene into FET channels between electrodes, and oxygen plasma was effective at removing unprotected graphene. The minimization of metal contaminants in graphene films is critical for integration in the IC fabrication facilities. Avoiding processes which etch away the copper substrate is essential to achieve this.

Over the past few years, a number of well-controlled chemical functionalization procedures have been developed that are compatible with GFETs. Graphene FETs have been functionalized with proteins, chemical compounds, and DNA molecules to make sensors for various applications.

For the case of protein functionalization, non-specific protein binding is undesirable as it typically implies loss of control over the protein’s functional structure.9 A.T. Charlie Johnson’s group at the University of Pennsylvania has demonstrated multiple attachment chemistries appropriate for use on graphene devices. These can be based on diazonium compounds that form a covalent bond to the graphene surface10 or bifunctional pyrene compounds that interact with graphene through a π–π stacking interaction.10,11 The linkage to the protein can be done through amide bond that is permitted at suitable amine groups on the protein exterior11 or via Ni-nitrilotriacetic acid linkage to a histidine tag on a recombinant protein.12 In each case, control of the parameters of the attachment chemistry (e.g., concentration, temperature, time) make it possible to perform the functionalization while retaining the high quality properties of the graphene device that contribute to high sensitivity (in particular, the high carrier mobility and favorable noise characteristics).

Applications in Biosensors and Chemical Sensors

Graphene’s exceptional electronic and thermal properties and high surface to volume ratio make it particularly suited in applications such as biosensors,13,14 gas sensors,15,16 and high performance transistors.17–19 Graphene-based devices could enable rapid high-sensitivity sensors for healthcare point-of-care diagnostics and chemical detection and have the potential to replace other methodologies that are high cost, low sensitivity, and labor intensive.

A.T. Charlie Johnson’s group has demonstrated a GFET sensor for the detection of small molecules at pg/mL concentrations.14 GFETs were functionalized with a computationally designed water-soluble variant of human μ–opioid receptor (G protein-coupled receptor) using the 4-carboxybenzenediazonium tetrafluoroborate, which produced carboxylic acid sites on the graphene, which were further activated and stabilized with 1-ethyl-3-[3-dimethylaminopropyl] carbodiimide hydrochloride (Prod. No. 03449 and Prod. No. E7750)/sulfo-N-hydroxysuccinimide (EDC/sNHS).20 Electronic measurements of the source-drain current as a function of the back-gate voltage following each step of the functionalization procedure showed reproducible shifts in conductance. Detection of the μ–opioid receptor target naltrexone (opioid receptor antagonist, Prod. No. 1453504) was reported at concentrations as low as 10 pg/mL, with high specificity.14 Studies utilizing engineered single chain variable fragment (scFv) instead of full antibodies as receptor molecules on other carbon-based FET sensors have shown a 1,000× improvement in the detection limit.21 scFv is an engineered fusion protein containing the variable regions of the antibody which are specific to the antigen and retain the specificity of the original antibody despite the removal of the constant regions which make up the majority of the antibody. The improved sensitivity of FET sensors functionalized with scFvs can be attributed to the closer proximity of the bound biomarker target to the GFET channel, thus leading to stronger electrostatic interactions and a larger electrical signal.21