It is well known that polyacetylene is a one-dimensional conjugated macromolecule and a good representative for conducting polymers.1 Pristine polyacetylene is a typical semiconductor, but its electrical conductivity can be amplified by over 14 orders of magnitude through doping.2,3 The maximum conductivity reported to date is more than 105 S/cm,4 which is comparable to those of copper and gold. It has been generally accepted that polyacetylene has a planar structure, irrespective of cis and trans forms, due to the strong π-conjugation between the sp2 hybridized carbon atoms in the polymer chain. If it were possible to modify such a planar structure of polyacetylene into a helical one,5,6 one might expect novel electromagnetic and optical properties.7,8 Here, we present a modern polymerization method for acetylene in an asymmetric reaction field using a chiral nematic liquid crystal (N*-LC) which is also called a cholesteric LC, which demonstrates the formation of a polyacetylene film comprised of helical chains and fibrils.6,9-14 Polymerization that results in helical geometry from primary to higher-order spiral morphology is discussed.

The N*-LC to be used as an asymmetric solvent is prepared by adding a small amount of chiral compound, which serves as a chiral dopant, into a nematic LC (Figure 1). The formation of a N*-LC is recognized when the Schlieren texture characteristic of the nematic LC changes into a striated Schlieren or a fingerprint texture as seen under a polarized optical microscope (POM). The distance between the striae corresponds to half the helical pitch of the N*-LC. Note that as the degree of twisting in the N*-LC increases, the observed helical pitch is reduced. The helical pitch of the N*-LC can be adjusted by two methods: changing the concentration or changing the twisting ability of the chiral dopant. It should be noted however that changing the concentration of the chiral dopant affects the mesophase temperature region of the N*-LC. Namely, it becomes narrower as the dopant concentration increases, eventually resulting in destruction of the mesophase when the concentration reaches a critical value. As a result, the alternative approach of using a chiral compound with greater twisting ability is employed. Axially chiral binaphthyl derivatives are good candidates for chiral dopants,15 since they have been reported to possess larger twisting abilities than asymmetric carbon containing chiral compounds.16 (R)- & (S)-1,1′-bi-naphthyl-2,2′-di-[para-(trans-4-n-pentylcyclohexyl) phenoxy-1-hexyl]ether were synthesized through Williamson etherification reactions of optically pure (R)-(+)- and (S)-(-)-1,1′-bi-2- naphthols respectively which have been functionalized with phenylcyclohexyl derivatives. These materials will be referred to as (R)- and (S)-PCH506-Binol (Figure 2). The substituent is composed of a phenylcyclohexyl (PCH) moiety, an n-pentyl group (5 carbon chain), and a hexamethylene chain linked with an ether-type oxygen atom, [-(CH2)6O- , 06], and thus abbreviated as PCH506. To prepare an induced chiral nematic LC, 5-14 weight % of (R)- or (S)-PCH506-Binol was added as a chiral dopant to an equimolar mixture of the nematic LCs 4-(trans-4-n-propylcyclohexyl)ethoxybenzene (PCH302) and 4-(trans-4-n-propylcyclohexyl) butoxybenzene (PCH304). The PCH506 substituent group in the (R)- and (S)-PCH506-Binol enhances the miscibility between the nematic LC mixture and the binaphthyl derivative used as the chiral dopant. Usage of a similar substituent with a shorter methylene spacer such as PCH503 or normal alkyl substituent gave insufficient miscibility, yielding no chiral nematic phase. In polarizing optical micrographs of the mixture of PCH302, PCH304, and (R)-PCH506-Binol (abbreviated as R-1) and that of PCH302, PCH304, and (S)-PCH506-Binol (abbreviated as S-1), a striated Schlieren or a fingerprint-type texture, characteristic of chiral nematic LC phases, is observed (Figure 1).

At first it should be noted that although each component (PCH302 or PCH304) shows a LC phase, the LC temperature region is very narrow, i.e., less than 1 to 2 °C. This would be unsuitable for acetylene polymerization in a nematic LC or N*-LC reaction field, because the exothermal heat evolved during the acetylene polymerization would raise the temperature inside the reaction flask, and destroy the LC phase creating an isotropic one. Hence, an appropriate LC mixture is prepared by mixing the two LC components in equal amounts. In the LC mixture, the nematic-isotropic temperature, TN-I, is raised while the crystallinenematic temperature, TC-N, is lowered. In fact, the mixture exhibited the LC phase in the 20 to 35 °C region. Subsequently, the change of TN-I upon an addition of Ti(O-n-Bu)4 - AlEt3 catalyst was examined through DSC measurement. Even after taking into account the effect of supercooling for LCs, the catalyst solution consisting of the LC mixture and the chiral dopant had an available temperature range for polymerization from 5 to 25 °C. This sufficiently wide temperature region enabled us to perform the acetylene polymerization in the N*-LC phase.

The Ziegler-Natta catalyst consisting of Ti(O-n-Bu)4 and Et3Al was prepared using the (R)- or (S)-chiral nematic LC as a solvent (Figure 2). The concentration of Ti(O-n-Bu)4 was 15 mmol/L, and the mole ratio of the cocatalyst to catalyst, [Et3Al] / [Ti(O-n-Bu)4], was 4.0. The catalyst solution was aged for 30 min at room temperature. During the aging, the N*-LC containing the catalyst showed no noticeable change in optical texture, and only a slight lowering of the transition temperature by 2 to 5 °C. The transition temperature between the solid and chiral nematic phases was 16 to 17 °C, and that between the chiral nematic and isotropic phases was 30 to 31 °C. No solidification was observed down to -7 °C as a result of supercooling. Thus the (R)- and (S)-chiral nematic LCs are confirmed to be chemically stable in the presence of the catalyst. It is therefore suitable to employ these LCs as an asymmetric solvent for acetylene polymerization. Acetylene gas (99.9999 % purity) was used without further purification. The polymerization temperature was kept between 17 to 18 °C to maintain the chiral nematic phase, by circulating cooled ethanol through an outer flask covering the flask. The initial acetylene pressure was 11.6 to 22.6 Torr and the polymerization time was between 10 to 43 minutes. After polymerization, the polyacetylene films were carefully removed from the container and washed with toluene several times under argon gas at room temperature. The films were dried under vacuum on a PTFE sheet and stored in a freezer at -20 °C.

Scanning electron microscope (SEM) images of the polyacetylene films show that multiple domains of spiral morphology are formed (Figure 3), and each domain is composed of a helical structure of fibrils with onehanded twist direction (Figure 3 inset). The multi-domain type fibril morphology of polyacetylene seems to replicate that of the N*-LC used in the interfacial acetylene polymerization. Closer observation of SEM images indicates that helical polyacetylenes synthesized in the (R)- and (S)-chiral N*-LCs form the twisted bundles of fibrils and even screw-shaped fibrils with counterclockwise and clockwise directions, respectively. This result implies that the twist direction of helical polyacetylene is controllable by choosing the helicity, i.e., chirality of the dopant, when the N*-LC induced by the chiral dopant is employed as an asymmetric polymerization solvent. The helical pitch of the N*-LC depends on the helical twisting ability of the chiral dopant, as well as its concentration and optical purity. This means that the helical pitch of the polyacetylene chain can be also varied by changing helical twisting ability of the chiral dopant. Another axially chiral dopant, (R)- or (S)-6,6′-PCH506-2,2′-Et-Binol14,15 gave a shorter helical pitch of N*-LC by 0.3 μm than the corresponding (R) or (S)-PCH506-Binol. Acetylene polymerization using these types of highly twisted N*-LCs, designated (R-2)- and (S-2)-chiral nematic LCs, afforded clearer spiral morphologies consisting of helical bundles of fibrils (Figure 4). Namely, these bundles are aligned parallel to each other in the microscopic regime, and forms spiral morphologies in the macroscopic regime. It is noteworthy that the higher order structures observed in Figure 3 resemble the helical self-assembled microstructure of biological molecules such as lipids, which are rarely formed in synthetic polymers. This validates the use of N*-LC as a template polymerization medium for controlling a higher order structure of synthetic polymer. 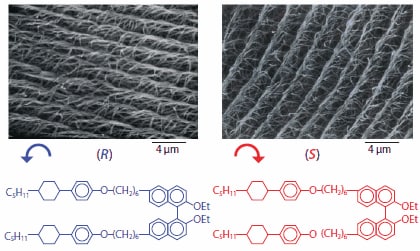 The bundles of fibrils for helical polyacetylenes synthesized in the (R-2)- and (S-2)-N*-LCs are twisted counterclockwise and clockwise, respectively (Figure 4). The hardness of helical polyacetylene are opposite to those of the corresponding (R-2)- and (S-2)-N*-LC whose directions are confirmed to be clockwise and counterclockwise, respectively, through the miscibility test with cholesteryl oleyl carbonate (Product No. 151157). This is the same situation as the case of the (R-1)- and (S-1)-N*-LCs including (R)- and (S)-PCH506-Binol. In circular dichroism (CD) spectra of the polyacetylene thin films synthesized under the (R-2)- and (S-2)-chiral nematic LCs, positive and negative Cotton effects are observed respectively in the region from 450 to 800 nm corresponding to π -> π* transition of polyacetylene chain, despite the absence of chiroptical substituent in side chains. This indicates that the polyacetylene chain itself is helically twisted. It is evident that the above Cotton effect is not due to the chiral dopant [(R)- or (S)- 6,6′-PCH506-2,2′- Et-Binol], because the Cotton effect of the chiral dopant is only observed at shorter wavelengths such as 240 ~ 340 nm. From these results, it can be concluded that left-handed (counterclockwise) and right-handed (clockwise) helical polyacetylene chains are formed in (R)- and (S)-chiral nematic LCs, respectively, and that these helical chains are bundled through van der Waals interactions to form helical fibrils with the opposite helical directions to those of the N*-LCs. The bundles of fibrils further form the spiral morphology with various sizes of domains (Figure 5). The present helical polyacetylene films have high trans content of 90%, and become highly conductive upon iodine doping. In fact, the electrical conductivities of the doped films are 1.5 ~ 1.8 × 103 S/cm at room temperature, which are comparable to those of metalic materials. The iodine-doped polyacetylene showed the same Cotton effect as that of non-doped polyacetylene, although the CD peak was slightly shifted to shorter wavelengths. This indicates that the helical structure is preserved even after iodine doping. Furthermore, CD and X-ray diffraction measurements showed that the helical structure was also preserved after heating up to 150 °C (which corresponds to the isomerization temperature from cis to trans form). It is well-known that the most stable structure of polyacetylene is the planar one. However, since the polyacetylene is actually insoluble and infusible, the helical structure formed during the polymerization can be preserved even if it is washed by toluene (Product No. 244511) or thermally heated below the isomerization temperature. In other words, the insolubility and infusibility characteristics of polyacetylene are important for preserving the meta-stable helical structure.17 Lastly, it is worth noting that the present polymerization method using the N*-LC (i.e., cholesteric LC) as an asymmetric reaction field has profound versatility for the synthesis of helical π-conjugated polymers that do not contain chiral substituents in side chains. In fact, very recently, a number of helical conjugated polymers such as polybithiophene, polyethylenedioxythiophene derivatives, and phenylene-thiophene copolymers were synthesized through chemical and/or electrochemical polymerizations in N*-LCs environments.18-20

We present current progress in the synthesis and also the novel properties of conjugated polymers by focusing on helical polyacetylene with super-hierarchical structure.14 Interfacial polymerization of acetylene was carried out in asymmetric reaction field consisting of a N*-LC and a Ziegler-Natta catalyst. Since the N*-LC is composed of a nematic LC and a chiral compound such as axially chiral binaphthyl derivative with R- or S-configuration, the helical directions of polyacetylene chain and fibril bundles and even the spiral morphology are determined by the chirality of the chiral dopant. The helical directions of the fibril and the bundle of the fibril in helical polyacetylene were found to be opposite to that of the N*-LC. The hierarchical spiral morphology involving the primary and higher order structures is generated in a synthetic polymer such as polyacetylene by using N*-LC as an asymmetric polymerization solvent.