Tissue engineering has become a key therapeutic tool in the treatment of damaged or diseased organs and tissues, such as blood vessels and urinary bladders.1 Nonetheless, major challenges still need to be overcome, in particular the construction of tissues with high cell densities and the prevention of post-transplantation inflammation. A promising tissue engineering approach relies on the use of cell culture surfaces grafted with poly(N-isopropylacrylamide) (PNIPAM, Prod. No. 535311).2 The basic idea is that cell adhesion/detachment on PNIPAM-modified substrates can be achieved by a simple temperature switch (Figure 1). 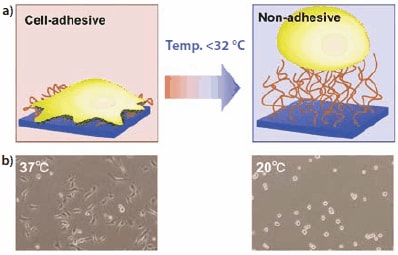 Figure 1.(a) Schematic representation of the adhesion (37 °C) and detachment (20 °C) of a cell on a poly(N-isopropylacrylamide)-grafted surface. Cell harvest is achieved simply by lowering the temperature. (b) Micrographs of endothelial cells on PNIPAM-coated dishes at 37 °C and 20 °C. Note the elongated shape of cells on the left micrograph characteristic of a supported cell culture, and rounded cell shape on the right characteristic of free cells in solution.

Cultured cells can be harvested from the "smart" PNIPAM surfaces in the form of a tissue-like cellular monolayer or “cell sheet” simply by lowering the cell culture temperature from 37 °C to 20 °C once confluency has been achieved. This cell manipulation technology enables the transplantation of cell sheets to host tissues without the use of biodegradable polymer scaffolds, overcoming a major constraint of conventional tissue engineering. The chemistry that underlies this process is described in this article, starting with a brief review of the properties of PNIPAM in aqueous solution. Special emphasis is placed on the design and fabrication of modified surfaces used to obtain multifunctional cell sheets.

PNIPAM is soluble in organic solvents, such as chloroform, acetone, methanol, and various other alcohols. It is also soluble in water, as long as the solution is kept reasonably cold. Heating an aqueous PNIPAM solution past 32 °C (the cloud point (CP) or lower critical solution temperature (LCST)) instantaneously converts the clear solution into a milky suspension. The phenomenon is reversible: as soon as the milky suspension is cooled below 32 °C it recovers its clarity.3 In the late 1960s, Heskins and Guillet published the first phase diagram of the water/ PNIPAM system, which they constructed by measuring the phase transition temperature as a function of PNIPAM concentration.4 At about the same time, it became known that crosslinked PNIPAM networks (gels) also exhibit curious properties in water: they are highly swollen in cold water, but shrink as soon as they are heated above 32 °C. As in the case of PNIPAM solutions, the behavior of the gels is reversible, swelling back to their original volume, as soon as they are cooled below 32 °C. Hundreds of swelling/shrinking cycles can be performed by a gel, with no sign of material fatigue. This unusual phenomenon was noticed by Allan S. Hoffmann, who was among the first to use the temperatureinduced phase transition of PNIPAM derivatives as a trigger to control phenomena relevant to biomedical applications, such as the release of a dye or drug.5 This pioneering work laid the foundation of the field of responsive systems, which continues to captivate the imagination of scientists.6 The heat-induced phase transition exhibited by aqueous PNIPAM solutions is not unique, as many other water-soluble polymers have cloud points. However, PNIPAM remains the leader for biomedical applications because of the sharpness of the transition, a transition temperature that is close to body temperature, the robustness of the polymer itself, and the availability of information on the polymer and its phase transition.

On the molecular level, the macroscopic phase transition corresponds to the dehydration of the PNIPAM chains and subsequent collapse of the denuded hydrophobic chains into compact globules that aggregate into larger mesoglobules (Figure 2).7,8 However, the phase transition is not solely dependent upon the temperature-induced molecular rearrangement. Several other factors can affect the CP of PNIPAM, although the effects are not always predictable. Figure 2.Temperature-responsive properties of aqueous poly(N-isopropylacrylamide) (PNIPAM) solutions; (a) when heated above the LCST, the hydrated extended PNIPAM chain collapses into a hydrophobic globule with simultaneous release of the bound water molecules; (b) chemical structure of the repeat unit of PNIPAM; (c) Plot of the changes in solution transmittance as a function of temperature for a PNIPAM solution in water. The LCST corresponds to the mid-point of the transition curve.

The extent of the affect of polymer molecular weight on the cloud point has been debated. There are some reports indicating that the cloud point of PNIPAM in water is directly related to molecular weight, while others report an inverse dependence of the CP on molecular weight and still others report that the CP of aqueous PNIPAM solutions are independent of molecular weight. The differences are particularly striking when comparing the results obtained for relatively short polymer chains (Mw <20,000 g/L) for which the chemical nature of the chain end has a significant impact on the CP value.9 Polymers with hydrophilic end groups tend to exhibit a relatively high cloud point in the low concentration solutions, whereas polymers with hydrophobic end groups usually have lower CPs under the same conditions.10 These trends break down for solutions of PNIPAMs with strongly hydrophobic end groups, such as n-octadecyl chains, which self-assemble in water to form flower and star micelles.11,12

The presence of multi-solvent systems can also have an impact on the CP of PNIPAMs. For example, at room temperature, PNIPAM is not soluble in a water/methanol mixed solution over a range of compositions—exhibiting a phenomenon called co-nonsolvancy.13

The presence of salts can also affect the CP of aqueous PNIPAM solutions, with some salts causing an increase in the CP, while the addition of other salts yield a CP decrease. Several explanations have been offered to account these observations.14 Once the factors affecting the phase transition of the PNIPAM are fully understood, then they can be used to tailor and optimize PNIPAMs for further applications. However, exciting uses of this smart polymer have already been uncovered.

PNIPAM-coated cell culture dishes are prepared by electron beam irradiation (0.3 MGy at 150 kV) of NIPAM monomer (724459), deposited on commercial tissue culture polystyrene (TCPS) cell culture dishes from a NIPAM solution in 2-propanol (Figure 3). This treatment results in simultaneous polymerization of NIPAM and covalent grafting of the growing polymer chains on the TCPS surfaces. The method is clean, readily amenable to scale-up and patterning, and it allows fine control over the polymer layer thickness. For most cell culture applications, the thickness of grafted PNIPAM layer should be within the 15–20 nm range, which corresponds to a grafting density of 1.4–2.0 μg/cm2.15

Various cell types adhere and grow on temperature-responsive PNIPAM culture surfaces under culture conditions similar to those used with ordinary TCPS dishes. After reaching cell confluency at 37 °C, the dishes are cooled below 32 °C (typically to 20 °C). The polymer chains rehydrate and repel the cells, inducing the cells to peel off from the culture surface in the form of a cell sheet comprised of a contiguous monolayer of cells. In conventional cell-based tissue engineering, proteolytic enzymes (e.g., trypsin and dispase) are added to the culture medium in order to detach the cells by disruption of cell adhesion molecules and extracellular matrix (ECM) proteins. This treatment can also affect the cell membrane proteins that are vital to the distinctive functions of various cell types. No enzymatic treatment is necessary to harvest cells cultured on temperature- responsive surfaces. Hence, the recovered cell sheets, which still possess their basal ECM proteins, can be transferred onto new culture dishes, other cell sheets, or living tissues. Several cell sheet tissue engineering clinical trials are in progress using transplantation of single cell sheets, such as cornea and periodontal ligament. Ongoing studies include homo- and heterotypic layering of multiple cell sheets to create 3D tissue-like architectures, such as heart or liver tissues.16

To mimic specific tissue functions, it is necessary to regenerate spatially ordered tissue architectures with heterotypic cell-cell interactions. It is not easy to integrate multiple cell types within a single 3D tissue architecture, since the adhesion and proliferation properties of different cell types are usually not the same. In most cases, co-culture of different cell types is carried out on micropatterned surfaces. Temperatureresponsive micropatterned surfaces are easily fabricated based on the fact that the LCST of PNIPAM can also be modulated by incorporation of a comonomer. NIPAM copolymers with hydrophilic comonomers have an LCST >32 °C, while NIPAM copolymers incorporating a hydrophobic monomer, such as n-butyl methacrylate (BMA), have an LCST <32 °C. To prepare a micropatterned surface, a solution of BMA (235865) in 2-propanol is spread over a PNIPAM-grafted TCPS dish. Subsequently, the BMA-coated surface is irradiated with an electron beam through a stainless steel micropatterned mask.17 The BMA monomers are grafted onto the preformed PNIPAM layer in the irradiated areas, in contrast to the masked sections, where the original PNIPAM is preserved. The transition temperature of the irradiated areas is lower than 32 °C. The actual LCST value is modulated by controlling the level of BMA incorporation. An application of this patterning method for the co-culture of hepatocytes (HC) and endothelial cells (EC) is depicted in Figure 4. 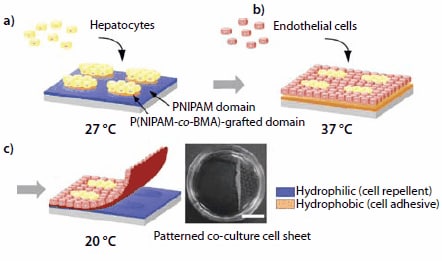 First, HCs are seeded on a micropatterned interface kept at 27 °C. They adhere exclusively onto the P(NIPAM-co-BMA) domains, which are dehydrated (hydrophobic) at this temperature. The PNIPAM domains, which are hydrated (hydrophilic) at 27 °C, repel the cells (Figure 4a). Next, the HC-coated interface is heated to 37 °C. The PNIPAM domains become hydrophobic and ECs are seeded. They adhere to the PNIPAM domains and proliferate, (Figure 4b and 4c). Lowering the culture temperature to 20 °C triggers the hydration of the entire surface. The co-cultured cell monolayer detaches spontaneously, yielding a continuous cell sheet with heterotypic cellular interactions. The recovered co-cultured cell sheets can be manipulated and sandwiched between other cell sheets for the preparation of tissue-mimicking multi-layered materials.

Functionalization of a Temperatureresponsive Culture Dish

Chemically-reactive (functional) comonomers can be incorporated into the grafted PNIPAM layer and serve as sites for the introduction of bioactive molecules, as exemplified in Figure 5.15 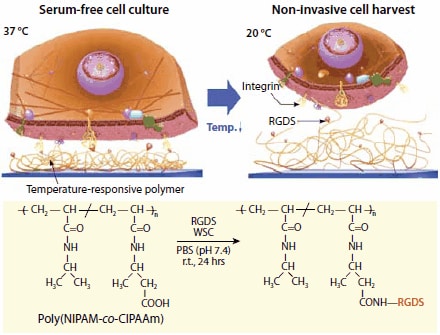 First, TCPS dishes are grafted with a copolymer of NIPAM and 2-carboxyisopropylacrylamide (CIPAAm) by electron beam polymerization of a NIPAM/CIPAAm mixture (CIPAAm content: 1–5 mol%). Subsequently, the synthetic cell adhesion tetrapeptide, Arg-Gly-Asp-Ser (RGDS, A9041) is linked covalently to the P(NIPAM-co- CIPAAm) grafted TCPS dish, using standard amide bond formation methodologies.18 The presence of RGDS on the interface promotes cell adhesion and growth to confluency at 37 °C under the serum-free culture conditions supplemented with recombinant growth factors. After reaching confluency, cells can be harvested as intact cell sheets by simply reducing the temperature to 20 °C, as in the case of PNIPAMgrafted culture dishes. Rehydration of the PNIPAM surface chains irreversibly disrupts the interactions between the surface-immobilized RGDS peptides and the cell membrane integrin receptors. This strategy significantly reduces the culture period and allows for the growth of cells in the absence of the traditional fetal bovine serum, which is an important consideration given the potential risks associated with the use of mammalian-sourced products in the manufacture of tissues used in clinical applications for human cell therapies.

Future progress in temperature-responsive cell sheet engineering depends on the availability of precisely optimized PNIPAM-grafted surfaces enabling the controlled fabrication of heterotypic cell sheets. One promising approach relies on the use of PNIPAM brushes of controlled thickness and grafting density prepared by controlled radical polymerization, such as atom transfer radical polymerization (ATRP) and reversible addition-fragmentation chain transfer (RAFT) polymerization.19-21 The development of these novel smart surfaces and their research and medical use will open up new frontiers in the biological and medical fields.