Three methods for optimizing puriﬁcation of histidine-tagged proteins to achieve high purity are discussed in this chapter:

The presence of surface-exposed histidine residues or other complex-forming amino acids can lead to unwanted binding of untagged host cell proteins to puriﬁcation media. These untagged proteins may elute with the target protein. The binding afﬁnity of these contaminants is often lower than that of the tagged recombinant proteins; therefore, it may be possible to remove them by optimizing the separation conditions.

The examples below show how changes in imidazole concentration during binding affect the purity of the histidine-tagged target protein.

When using Ni Sepharose® excel and TALON® Superﬂow products it is usually not recommended to include imidazole during binding.

1. Imidazole as a competitive agent

Imidazole is utilized as a competitive agent for elution of histidine-tagged proteins. In addition, imidazole can be added in low concentrations in the sample and binding buffer in order to reduce the binding of contaminant proteins, and thus increase the ﬁnal purity.

To achieve a higher protein concentration, the protein was eluted in a step gradient (Figure 4.1A). To demonstrate the advantageous effect of imidazole during binding, an additional puriﬁcation was performed under the same conditions except that imidazole was omitted (Figure 4.1B). It is important to note that omission of imidazole is not generally recommended for Ni Sepharose® High Performance or Ni Sepharose® 6 Fast Flow; this example is provided solely to demonstrate the negative effect of its absence on the purity of the eluted target protein.

SDS-PAGE of the pooled elution fractions indicated a large improvement in purity of the target protein when 45 mM imidazole was included in the sample and binding buffer (Figure 4.1C). The yield of the target protein was in this case maintained in the sample with 45 mM imidazole present. Note that the optimal concentration of imidazole is protein dependent and thus must be determined case by case. 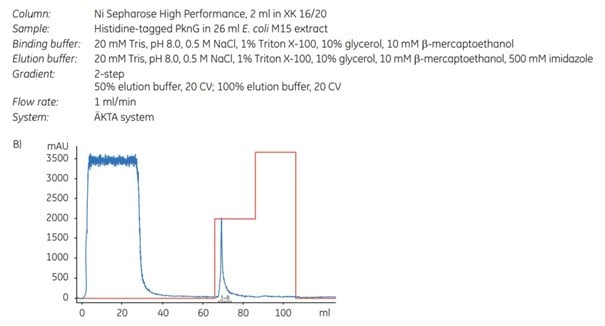 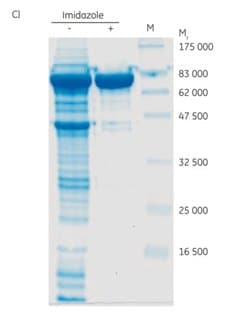 Figure 4.1. Puriﬁcation of (His)6-PknG without (A) and with (B) 45 mM imidazole in the sample and binding buffer. For each chromatogram, the lysate of 2 l of E. coli culture (sample volume 26 mL; ﬁltered through a 0.45 µm syringe ﬁlter) was loaded on a 2 mL Ni Sepharose® High Performance column (XK 16/20 column) using ÄKTApuriﬁer chromatography system (now replaced by ÄKTA pure). The kinase was eluted in a two-step gradient with 50% and 100% of elution buffer. (C) SDS-PAGE (12% gel) of (His)6-PknG fractions showing eluates without (-) and with (+) 45 mM imidazole in the binding buffer. Data kindly provided by K. Hölscher, M. Richter-Roth and B. Felden de Neuman, GPC Biotech AG, Martinsried, Germany.

The imidazole concentration during binding and washing is an important factor for the ﬁnal purity and yield of the target protein. His SpinTrap is a convenient and fast tool for determination of optimal imidazole concentration. Optimization is important for both purity and yield of the target protein. This was demonstrated by a series of experiments where a histidine-tagged protein, APB7-(His)6 (Mr 28 000), was puriﬁed on His SpinTrap using 5, 50, 100, or 200 mM imidazole in sample and binding buffers. The elution buffer contained 500 mM imidazole. The strength of binding between a protein and a metal ion is affected by several factors, including the structure and characteristics of the target protein, the presence and properties of the protein afﬁnity tag, the properties of the metal ion, and the pH and composition of the binding buffer. As a result, Ni2+, the metal ion considered to have the strongest afﬁnity to histidine-tagged proteins, may not always be the best choice for a given application. Under some circumstances, therefore, other transition metal ions, such as Co2+, Cu2+, Fe2+, and Zn2+, may be better suited.

The following guidelines may assist in devising preliminary experiments to determine the metal ion most suitable for a given separation:

Below we present two examples showing how the selection of the most suitable metal ion and experimental conditions (including imidazole concentration) affects the puriﬁcation of a given target protein.

Screening experiments were performed to determine the optimal imidazole concentration for each ion [Figure 4.3 (A to C)]. The results of each of these three puriﬁcations indicate:

Note that a large amount of sample was applied in the SDS-polyacrylamide gel. Because of this, the gels show a number of contaminants in the eluted material even though the purity was very high.

The results illustrate that, for any given metal ion, imidazole concentration can be adjusted to achieve high yield, high purity, or a successful compromise. IMAC Sepharose® media typically requires a slightly higher concentration of imidazole in the wash buffer than similar IMAC media on the market. A good starting point for most separations is to include 20 to 40 mM imidazole in the binding and wash buffers using IMAC Sepharose® 6 Fast Flow or IMAC Sepharose® High Performance. Be sure to use highly pure imidazole, which gives essentially no absorbance at 280 nm. To remove imidazole from the protein, use a desalting column (Chapter 11, Desalting/Buffer Exchange and Concentration).

The results demonstrate the importance of screening samples to determine the most suitable metal ion and puriﬁcation conditions for speciﬁc target proteins. For APB7, the highest purity was achieved using Ni2+ or Co2+, but the difference compared with the results for Zn2+ and Cu2+ was small (Figure 4.4). The gradient elutions with imidazole employed in these examples also offer a methodology for selecting the appropriate imidazole concentration for a given puriﬁcation. Target protein can be further puriﬁed by adding one or more additional puriﬁcation steps, as shown in the examples below. This topic is discussed in detail in Chapter 9 (Affinity chromatography in a purificationstrategy (CIPP)).

Below we present two examples showing successful multistep puriﬁcation of the target proteins.

In a two-step puriﬁcation of (His)10-trx-p450 (histidine-tagged at the N-terminus, 10 histidine residues) produced in E. coli, a HisTrap FF column was used in the ﬁrst step. The eluted pool was then applied to a HiLoad 16/60 Superdex 200 pg column for further puriﬁcation by SEC. 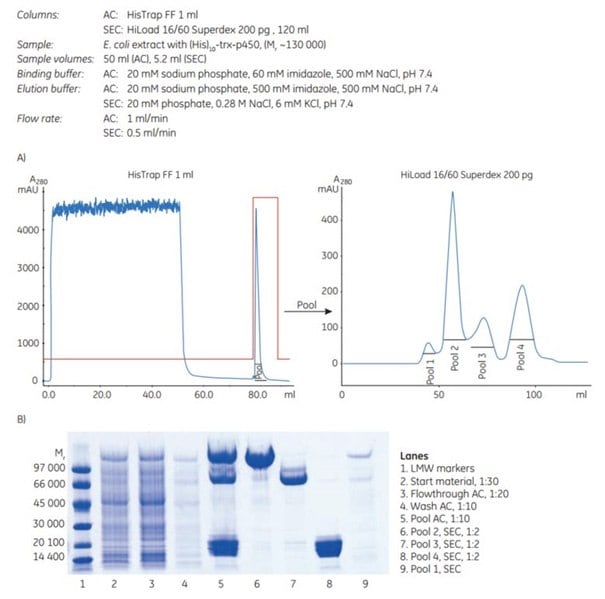 Figure 4.5.(A) Two-step puriﬁcation of a high-molecular-weight (histidine)10-tagged protein using AC followed by SEC. (B) SDS-PAGE under reducing conditions and Coomassie staining.

An automated three-step protocol was used to purify histidine-tagged maltose binding protein from 100 mL of an unclariﬁed E. coli cell lysate. The three steps were: Afﬁnity chromatography (AC) using HisTrap FF crude (1 mL column), desalting (DS) using HiPrep 26/10 Desalting, and ion exchange chromatography (IEX) using Mono Q™ 5/50 GL. These are referred to as AC-DS-IEX in the image. As can be seen from the SDS-PAGE analysis, the target protein was obtained highly pure and in good yield. Figure 4.6.(A) AC-DS-IEX with an enlargement of the IEX peaks and the collected pools to the right. Yield: 9.4 mg in pools 1 + 2. (B) SDS-PAGE of eluted pools from IEX. The gel was stained with Coomassie.