Novabiochem® product range has one of the largest collections of orthogonally and quasi-orthogonally protected tri-functional amino acids. These derivatives are useful tools for the synthesis of cyclic and branched peptides and peptides carrying side-chain modifications. The properties of Novabiochem®’s selectively protected amino acids are given in Table 1. 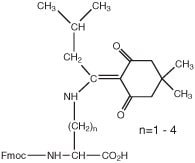 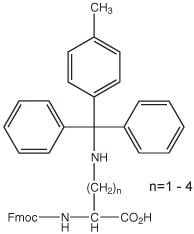 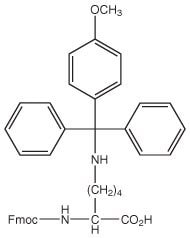 Since the introduction of the Dde1 and ivDde2 amino-protecting groups in 1993 and 1998, respectively, the Fmoc/xDde strategy has become the standard approach for the synthesis of branched, cyclic and side-chain modified peptides by Fmoc SPPS, with over 200 publications citing the use of these protecting groups3.

The utility of this strategy stems from the fact that Dde and ivDde-protected primary amines are stable to 20% piperidine and TFA but are cleaved with 2% hydrazine in DMF. Thus, amino groups protected by these groups can be selectively unmasked on the solid phase without affecting the side-chain protecting groups of other residues, facilitating subsequent site-specific modification. Furthermore, the reaction can be monitored by spectrophotometry since the indazole cleavage product absorbs strongly at 290 nm (Figure 1).

Examples of the use of the Fmoc/Dde strategy include: branched1 and di-epitopic peptides4, cyclic peptides5,6, TASP molecules7, fluorescently-labeled peptides8, multi-functional probes9, and ubiquinated peptides10.

The choice between Dde or ivDde depends on the application. Dde is easier to remove than ivDde but is much less robust. Dde has been observed to undergo migration during piperidine mediated deprotection of N-ε-Fmoc-Lys and N-terminal Dpr residues, leading to scrambling of its position within the peptide chain; and partial loss has been noted during the synthesis of long sequences11. The more hindered ivDde group on the other hand does not undergo leaching or side-chain migration to any significant extent, except in the special case of Dpr12, but can occasionally prove extremely hard to remove, particularly if located at the C-terminus of a peptide or in an aggregated region of the sequence.

As hydrazine can also remove Fmoc groups as well as Dde and ivDde groups, when preparing cyclic or side-chain modified peptides by the Fmoc/Dde strategy assembly of the peptide backbone is generally completed prior to deprotection of the Dde/ivDde groups. The N-terminus of the peptide should be protected with Boc, which can be achieved either by direct incorporation of the N-terminal residue as a Boc protected amino acid or acylation of the free N-terminal amino group with Boc2O.

Removal of Dde or ivDde is usually achieved by treating the resin with 2% hydrazine in DMF, although in cases where ivDde removal has proved difficult, solutions of as much as 10% hydrazine have been employed. The process can be followed spectrophotometrically at the same wavelength used for monitoring removal of Fmoc, since the reaction-product of the Dde or ivDde group with hydrazine is a chromophoric indazole derivative (Figure 1). Dde and ivDde also stable to the normal reagents employed for Boc cleavage (TFA or 50% TFA in DCM) and to DBU at the normal concentrations (approx. 2%) used for Fmoc removal.

If the ivDde group is close to the C-terminus of the peptide or the peptide has aggregated, removal ivDde can be very sluggish and often incomplete. The problem can be avoided for peptides containing side-chain modified lysine by using ivDde-Lys(Fmoc)-OH instead of Fmoc-Lys(ivDde)-OH for incorporation of those residues. The use of the former allows side-chain modification of lysine to be accomplished during chain extension. Following incorporation of ivDde-Lys(Fmoc)-OH into the peptide chain, the side-chain Fmoc group can be removed with piperidine, the side-chain amino group reacted with the desired carboxylic acid-functionalized moiety, before removal of the ivDde with hydrazine, and chain extension in the usual manner.

Complete orthogonality of Dde with Fmoc has been demonstrated if hydroxylamine hydrochloride/imidazole (1.3:1) in NMP instead of hydrazine in DMF is used for Dde removal13.

Method 1: Selective removal of Dde/ivDde with 2% hydrazine in DMF

The Mtt group can be removed from the side chain of lysine or ornithine using 1% TFA in DCM14 or with DCM/HFIP/TFE/TES (6.5:2:1:0.5) (Method 2), allowing selective removal in the presence of other side-chain protecting groups which require up to 95% TFA for removal. When using TFA, addition of 1-5% TIS or MeOH is recommended to quench the trityl cations released. Preliminary results indicate MeOH scavenging prevents loss of t-butyl groups and premature cleavage from Rink Amide resins15 (Method 2b).

Method 2: Removal of Mtt from Lys on solid phase

The Mmt group is considerably easier to remove than Mtt. It is cleaved rapidly from the side-chain of lysine using the same methods that were described for Mtt but can be even removed using AcOH/TFE/DCM (1:2:7)16 or HOBt in DCM/TFE (Method 3). The use of Fmoc-Lys(Mmt)-OH is ideal for those cases where removal of Mtt is problematic. Owing to the extreme acid sensitivity of the Mmt group, coupling of Fmoc-Lys(Mmt)-OH is best carried out using PyBOP®/DIPEA or other base-mediated coupling methods.

The Alloc group is stable to treatment with piperidine and TFA, but can be easily removed under mild conditions by Pd(0) catalyzed allyl transfer17. A variety of methods have been used for this step, but perhaps the most useful is that of Kates, et al. utilizing Pd(Ph3P)4/CHCl3/HOAc/NMM18 (Method 4). The Alloc group is not compatible with the conditions employed for removal of ivDde19. It is thought that the presence of a small amount of diazine in hydrazine causes reduction of the double bond in the allyl group. Fortunately, this side reaction can be easily overcome by the addition of allyl alcohol to the hydrazine reagent.

This reaction is air-sensitive and all manipulations should be carried out under Ar.

The above procedure can also be carried out on any automated peptide synthesizer which uses N2 agitation for dissolution and transfer of reagents. The Pd(PPh3)4 catalyst should be weighed out into an amino acid cartridge and dissolved in CHCl3-AcOH-N-methylmorpholine (37:2:1) with Ar agitation. The cartridge should be sealed and placed in the instrument autoloader as normal. The instrument should then be programmed to transfer the contents of the vial to reaction vessel or column without the addition of further reagents. If the instrument has any spare solvent reservoirs, these can be filled with 0.5% DIPEA in DMF and sodium diethyldithiocarbamate (0.5% w/w) in DMF to allow automated washing of the resin following allyl deprotection.

Note: If the N-terminal Fmoc group is removed after cleavage of the allyl ester or if a carbodiimide is to be used to effect cyclization, then the resin should also be washed with HOBt/DMF.

Azides can be reduced under mild conditions with thiols or phosphines to the corresponding amines. Therefore, Fmoc-protected amino acids bearing side-chain azido functionalities are useful tools for preparing branched and side-chain modified peptides. The azido group is stable to coupling conditions and to treatment with piperidine. It is also stable to TFA cleavage conditions provided thiols are omitted from the cocktail20. Reduction of the azide on the solid phase selectively unmasks the side-chain amino group without affecting any other amino-acid residues21, 22. 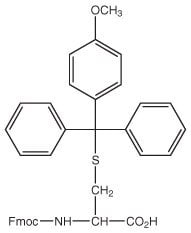 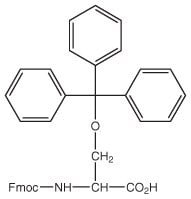 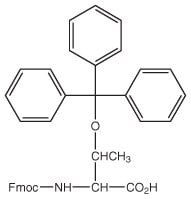 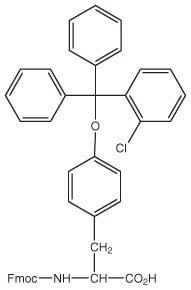 2-ClTrt, Trt and Mmt groups can be removed of the side chains of Tyr, Hse/Ser/Thr23 and Cys24 using only 1% TFA in DCM, leaving all other protecting groups intact (Method 6). This allows the selective deprotection of a single residue for subsequent side-chain modification. In products with multiple Ser, Thr or Tyr residues, selectivity is possible by incorporating all other such residues, except for the residue to be modified, as the t-butyl ether. Trityl group removal is an equilibrium process, so must be performed using silanes to scavenge the trityl cations, or in a continuous flow mode to drive the equilibrium. For Ser(Trt), Coba, et al. 25 have described the use of 20% dichloroacetic acid in DCM for 10 min for Trt removal. This procedure may also have wider application for the deprotection of other trityl-protected amino acids.

The most common application of the Ser/Thr/Tyr derivatives is in the preparation of phosphopeptides by the post-synthetic method using a phosphoramidite reagent.

aIf the peptide contains other trityl-based protecting groups, the level will not return to baseline owing to slow leaching of Trt groups].

Insertion of Cys(tButhio)27 or Cys(STmp)28 residues into a sequence allow selective deprotection of the thiol group on the solid phase, enabling either modification of Cys residues or on-resin disulfide bridge formation.

The t-butylthio group is stable to TFA, providing thiols are not used as scavengers in the cleavage reaction. It is removed by reduction with either thiols or trialkylphosphines29, 30. Recently, Góngora-Benítez, et al.31 demonstrated the effectiveness of 20% β-mercaptoethanol, 0.1 M NMM in DMF for removing tbutylthio on solid phase, where β-mercaptoethanol alone or phosphines were unsuccessful.

However in practice, it often proves extremely difficult to remove the tButhio group on the solid support. For this reason, Albericio has recently introduced the STmp group28. The STmp group appears to be extremely easily removed by mild thiolysis, as Albericio has reported removing four STmp groups on the solid phase with only three 5 minute treatments of 0.1 M N-methylmorpholine (NMM) in DMF containing 5% mercaptoethanol (Method 7).

Orthogonally and quasi-orthogonally protected Asp and Glu derivatives have numerous applications in peptide synthesis and combinatorial chemistry. α-Esters are particularly useful for the preparation of head-to-tail cyclic peptides by on-resin cyclization, whereas selectively protected β- and γ- esters of Asp and Glu can be utilized in the synthesis of glycopeptides and side chain-to-side chain or head-to-side chain lactam bridged peptides18, 31-36

Allyl esters are stable to treatment with piperidine and TFA but can be easily removed under mild conditions by Pd(0) catalyzed allyl transfer18, as previously described for the Alloc group (Method 4).

The allyl group is not compatible with the conditions employed for removal of ivDde19. It is thought that the presence of a small amount of diazine in hydrazine causes reduction of the double bond in the allyl group. Fortunately, this side reaction can be easily overcome by the addition of allyl alcohol to the hydrazine reagent. 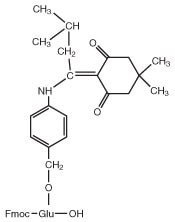 Dmab esters were developed in collaboration between Prof. B. W. Bycroft and Dr. W. Chan, of the University of Nottingham, and Novabiochem®, to provide a complement to Dde amino protection. The design of the Dmab blocking group is based on the safety-catch principle and the known propensity of p-aminobenzyl esters to undergo 1,6-elimination 37,38. The safety catch is provided by the ivDde group, which protects the amino function of the unstable p-aminobenzyl ester during synthesis.

Dmab protection is quasi-orthogonal to the Fmoc/tBu strategy, since Dmab esters are stable to 20% piperidine in DMF and to TFA, but are quantitatively cleaved with 2% hydrazine in DMF within minutes. Removal of Dmab involves a two-step process: treatment with hydrazine initially removes the N-ivDde group; this is then followed by collapse of the resultant p-amino benzyl ester, with concurrent release of the carboxylic acid (Figure 2).

The deprotection reaction can either be carried out in a batch-wise or continuous flow manner. In the latter case, the reaction can be monitored spectrophotometrically at 290 nm by following release of the indazole by-product. Sluggish cleavage of the aminobenzyl moiety has been occasionally observed39-42, and appears to be very sequence dependent. In these instances, washing the support with 20% DIPEA in DMF/water (90:10)39 or 5 mM sodium hydroxide in methanol42 has been found to be efficacious. As hydrazine will remove Fmoc, assembly of the peptide backbone must be completed prior to deprotection of the Dmab side chain. The N-terminus of the peptide should be protected with Boc. This can be achieved either by direct incorporation of the N-terminal residue as a Boc protected amino acid or acylation of the free N-terminal amino group with Boc2O.

Fmoc-Asp-ODmab has been employed to prepare a cyclic analog of pyrrhocoricin43, a 29-mer head-to-tail cyclic peptide44, and chlorofusin peptide45.

The 2-phenylisopropyl group (2-PhiPr)46 can be removed from the side chain of Asp and Glu using 1% TFA as in the protocol given in Method 6. The use of this protecting group in combination with Mtt on Lys or Orn provides an excellent strategy for the synthesis of side chain-to-side chain lactam bridged peptides. In contrast to Dmab and All, the 2-PhiPr group offers significant protection against aspartimide formation, which makes Fmoc-Asp(O-2-PhiPr) the derivative of choice for the synthesis of cyclic peptides that are prone to this side reaction.