Aspartimide formation 1,2 is caused by repeated exposure of aspartic acid containing sequences to bases like piperidine and can result ultimately in the generation of 9 different by-products (Figure 1)3–8. Whilst in many cases aspartimides and α- and β-piperidides generated by this side reaction may be easily separated from the target peptide by HPLC, the β-aspartyl peptides and epimerized α-aspartyl peptide are almost impossible to remove as these frequently have the same retention time as the target peptide. Furthermore, as they have the same mass as the target, the presence of these side products is hard to detect. Aspartimide formation is therefore a particularly serious consideration in the manufacturing of peptide-based APIs. 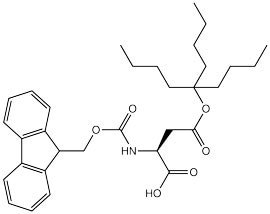 In comparative tests against Fmoc-Asp(OtBu)-OH and Fmoc-Asp(OMpe)-OH, using classic Scorpion toxin II peptide (VKDXYI, where X=G, N or R)11 where resin-bound peptides are treated with 20% piperidine in DMF for 200 min to simulate 100 x 2 min deprotection cycles, Fmoc-Asp(OBno)-OH gave by far the best results. For X=N and R, it reduced aspartimide formation to almost undetectable amounts (Figure 2, 3, Table 1). In the case of X=G, the most difficult situation, aspartimide formation was reduced to only 0.1%/cycle, which is negligible when one considers this is within the purity limits of commercially available N-α-Fmoc amino acids (Figure 4, Table 1).

Aspartimides are chirally labile7, which is reflected in the high D-aspartate values observed with the scorpion toxin II peptides prepared with Asp(OtBu) and Asp(OMpe) (Table 1). D-Aspartyl peptides are often hidden contaminants of purified peptides due to their identical molecular mass and almost identical physico-chemical properties. The low D-Asp values obtained with Fmoc-Asp(OBno)-OH strongly suggest its use in peptide manufacturing processes.

Easy to couple and no alkylation products

Standard Fmoc SPPS of (Gly²)-GLP-2, a 33mer, using Fmoc-Asp(OBno)-OH delivered a crude which contained negligible aspartimide related impurities, increasing the content of target peptide by 25% compared to the standard derivative Fmoc-Asp(OtBu)-OH (Figure 5). Single one hour couplings for the two Fmoc-Asp(Bno)-OH were used. The high purity of the product indicated Fmoc-Asp(OBno)-OH coupled easily and its use did not lead to formation of any Bno-related alkylation by-products during TFA-mediated cleavage.