Bacterial and mammalian expression vectors, or expression constructs, are circularized DNA transfection plasmids that are commonly used to overexpress recombinant proteins of interest. Unique sequences encoded within the vector construct contain promoter elements that are recognized by the transfected cells own protein synthesis machinery to drive the expression of the incorporated protein sequence.

The FLAG® expression system utilizes a short, hydrophilic 8-amino acid peptide that is fused to the recombinant protein of interest. Because of its hydrophilic nature, the FLAG® peptide is likely to be located on the surface of the fusion protein. As a result, the FLAG® peptide is easily accessible for cleavage by enterokinase (Ek) and for detection with antibodies. In addition, because of the small size of the FLAG® peptide tag, it is not likely to obscure other epitopes, domains, or alter function, secretion, or transport of the fusion protein.

The 3xFLAG® system is an improvement upon the original system by fusing 3 tandem FLAG® epitopes (22 amino acids). Detection of fusion proteins containing 3xFLAG® is enhanced up to 200 times more than any other system. Like the original FLAG® tag, 3xFLAG® is hydrophilic, contains an Ek cleavage site, and is relatively small. Therefore, the risk of altering protein function, blocking other epitopes or decreasing solubility is minimized.

Removal of N-terminal FLAG® (8 amino acids) and 3xFLAG® (22 amino acids) tags is possible using enterokinase, which cleaves following the Asp-Asp-Asp-Asp-Lys amino acid sequence at the c-terminal end of the tags.

The classic FLAG® and 3xFLAG® expression vectors have been converted to SnapFast™ Expression Vectors – combining two highly functional systems into one product. Additional information about the SnapFast™ system includes the Background & Popular Vectors, Selection Charts, and the SnapFast™ FAQs.

The FLAG® and 3xFLAG® vectors are available for bacterial and mammalian expression, using T7, Tac or CMV promoters. Vectors have an enterokinase cleavage site for removal of the tag from purified protein. Together with c-myc, some vectors offer dual-labeling. See charts below for quick-reference vector specifications and click the links to the product pages for more information, including vector maps.

FLAG® and 3xFLAG®: A Proven System for Detection and Purification of Proteins

Low-level expression of recombinant proteins in mammalian cells is a common problem that often makes detection of epitope tags difficult or impossible. Detection of 3x FLAG® using the ANTI-FLAG® M2 Ab and anti-mouse-HRP is 20-200 times more sensitive than any commonly used tag. An extensive selection of p3xFLAG® vectors utilizes the strong CMV promoter to drive expression. 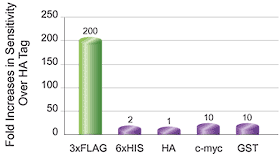 C-terminal fusions of GST and the tags listed above were prepared and analyzed on Western Blots. All proteins were detected using the appropriate tag antibodies, anti-mouse HRP and ECL.

The FLAG® and 3xFLAG® sequences include the binding sites for several highly specific ANTI-FLAG® monoclonal (M1, M2, M5) and polyclonal antibodies and conjugates, each with different recognition and binding characteristics. ANTI-FLAG® antibodies exhibit little or no cross-reactivity in most mammalian and bacterial cell lysates. One-step purification formats include affinity gels and 96-well plates.

Note: if you have used a FLAG® vector in the past, this chart will help you pick the closest SnapFast™ FLAG® and 3xFLAG® vector.