Advances of Noble Bimetallic Nanoparticles in Detection of Glucose Level

Diabetes mellitus is a disease characterized by insulin insufficiency, which causes spikes in blood glucose (hyperglycemia), or reduced glucose (hypoglycemia).1 While Type 1 Diabetes is characterized by the lack of insulin production from birth, Type II, the most common form of diabetes, is related to the improper use of insulin in the body. Since diabetes is an incurable disease, many patients must learn to manage and treat it appropriately.

Controlling glucose levels is a critical step for successful management of diabetes.1 Currently, blood-glucose concentration can be measured directly through a glucose biosensor or indirectly using a hydrogen peroxide (H2O2) biosensor. Glucose molecules break down into H2O2, which links the analysis of H2O2 to glucose concentration and presenting an orthogonal approach to glucose sensing.2–4 However, blood-glucose monitoring can be an invasive process, requiring a portion of the instrument to pierce the skin. Furthermore, traditional glucose sensors depend on enzymatic activity, which relies on temperature, humidity, and interference. Therefore, their windows of effectiveness and accuracy are narrow.5

Thus, there is a need to develop new glucose monitoring methods that are less invasive and more reliable. Nanotechnology can offer several potential approaches to addressing this challenge. Monometallic nanoparticles (NPs) have improved surface characteristics and catalytic properties depending on the element used. However, they suffer from some limitations in terms of toxicity and physicochemical properties. Noble bimetallic nanoparticles (BMNPs) present an alternative that can achieve significant functionality enhancement by combining different metal elements — making BMNPs useful potential tools in blood-glucose biosensing with limited invasiveness and enzymatic dependence. Research shows BMNPs have improved the analytical performance of sensors concerning sensitivity and selectivity.6

Research has already demonstrated the application of gold (Au) and silver (Ag) NPs for use in glucose monitoring.7 Au-based nanostructures exhibit the ability to oxidize glucose, making them ideal for measuring glucose concentration. Meanwhile, Ag-based structures exhibit the ability to induce an etching effect from the H2O2, making them ideal for measuring H2O2 concentration.8 Combining these or other noble metals may provide an exciting alternative; as such, we discuss the current advances in noble BMNPs, specifically Au-based and Ag-based structures, and their glucose detection applications.

Ag-based NPs, such as Ag-Au, Ag-Pt, and Ag-Pd NPs, exhibit exciting changes in their localized surface plasmon resonance (SPR), which help detect changes in H2O2 concentration.9 Based on these characteristics, researchers can combine Ag with other metals to produce a stable, sensitive, enzyme-free biosensor for H2O2 . For instance, Li et al. constructed a novel Ag-Au NPs alloy embedded into copper oxide (Cu2O) nanocubes on reduced graphene oxide (RGO) nanosheets for H2O2 detection. The nanocomposite synthesis occurred in a two-step photo-reduction method, depositing the product onto RGO sheets. The structure showed suitable electrocatalytic activities in the presence of H2O2, with a linear range of 0.05–50.75 mmol/L (mM) at -0.2 V, a detection limit of 0.1 µM, and sensitivity of 0.14 µA mM-1cm-2. Moreover, the nanocomposite exhibited selectivity in the presence of interfering species, along with a fast response time concerning changes in H2O2 concentration, resetting a steady state after 2 seconds.10

Similarly, researchers used a green synthesis approach to fabricate Ag-Au NPs using alginate which were subsequently deposited onto a RGO surface. The resulting Ag-Au/RGO product was deposited onto a carbon electrode. The resulting sensor exhibited high stability and selectivity to H2O2 and demonstrated wide dynamic range and high sensitivity. Interestingly, the study showed that the reduction of H2O2 was limited by the diffusion rate, not the catalysis rate.11 Sun et al. also utilized Ag-Au NPs performing in situ reductions by polydopamine (PDA) onto a carbon-fiber microelectrode. At optimal conditions at 20:80 Ag:Au atomic composition, the resulting electrode gave linear measurements over the range of 0–0.055 mM and 0.055–2.775 mM, with excellent sensitivity of 12966 μA mM-1cm-2 and 2534 μA mM-1cm-2, respectively. These results indicated that this sensor could potentially be suitable to detect trace amounts of H2O2.12

Other metal elements beyond Ag-Au NPs structures have also been utilized because of their synergistic effect. For instance, research shows platinum (Pt) can enhance the material’s overall electrocatalytic activities.13 In an interesting report, equimolar Ag-Pt NPs were synthesized, deposited onto the RGO surface, and coated on glassy carbon electrodes. This resulted in a wide linear range of measurement, high sensitivity, and a low detection limit. This performance was attributed to the synergistic combination of the RGO and Ag-Pt NPs. Samples of fetal bovine serum were tested using the Ag-Pt/RGO sensor, showing results within 5% of known concentration. Researchers also demonstrated glucose detection by measuring glucose oxidase presence.14 Additionally, an alternative method of UV-assisted synthesis of Ag-Pt NPs/ RGO nanocomposite was recently performed. Significantly, this structure exhibited enzyme-like kinetics, catalyzing 3,3’,5,5’-tetramethylbenzidine (TMB) in the presence of H2O2. The reaction produced a light blue color. Therefore, a colorimetric assay was used to determine the concentration of H2O2 instead of an electrochemical assay. At 652 nm absorbance, the assay exhibited a linear range of 0–1 mM, with the limit of detection of 0.9 μM. This work showed potential for a fast and portable strip test of H2O2 concentration.15

Like Pt, palladium (Pd) shows many advantageous properties, including its high electrocatalytic activity.16 Guler et al. investigated its potential for H2O2 detection using carbon electrodes coated with Ag-Pd NPs/Naflon (NA) on RGO nanocomposites, where NA was used as a protective membrane to the electrode’s surface. The RGO was functionalized with (3-aminopropyl) triethoxysilane (APTES) before exposure to Ag-Pd NPs/NA. Fourier-transform infrared spectroscopy (FTIR), X-ray diffraction (XRD), and Transmission electron microscopy (TEM) characterization confirmed the formation of the structure. Catalytic performance was tested through cyclic voltammetry, and the result indicated enhanced electrochemical activity of the Ag-Pt/NA electrode compared with only NA, Ag-NA, and Pt-NA electrodes, proving the synergistic effect of Ag and Pt. Samples of milk were analyzed to validate the sensor’s applicability, and the H2O2 concentration was determined to be accurate, with deviations within 3% of the known values, suggesting the sensor’s readiness for analysis of relevant samples.17

Overall, the detection of H2O2 using Ag-based BMNP structures presents a novel method that is both sensitive, stable, and enzyme independent. Measurement of H2O2 using Ag-based BMNPs can indicate the concentration of glucose as well as the enzyme’s activity in the oxidation pathway — potentially providing more information than just glucose sensing.

For example, Shim et al. developed core-shell structured Au-Pt NPs with Au cores and Pt shells coated onto a carbon electrode (Figure 1B–1C). They were synthetically produced and purified by centrifugation, with additional Au incorporated in the nanochannels. The Au-Pt nanoshells showed improved sensitivity, stability, and selectivity. The fabricated sensor possessed desirable dynamic ranges and detection limits as listed in PBS saline solution at 0.35 V potential. No sensitivity data was reported, but a stability test indicated only a 5% deviation in measurement after 30 days at a pH of 7.5. Also, minimal interference effect from other bio-compounds was observed.19 This result showed that Au-Pt sensors might exhibit resistance to other interfering molecules, thus, showing their selectivity.

Furthermore, Lin et al. synthesized a Au-Pt alloy using a hydrothermal reactor, loaded on nano-carbon carriers, and then modified onto glassy carbon electrodes. The result indicated that the optimal Au:Pt ratio for catalytic activity was 1:1. Stability testing was performed using 10mM glucose over an applied range of -0.6 to 0.6 volts for four days. After two days, the modified electrode maintained 95.4% of its initial current response, and after four days, the modified electrode maintained 84.5% of its initial response. Once the electrode was cleaned and analyzed between -0.5 V and 1.3 V with a newly fabricated electrode, the result was similar (Figure 1D).20 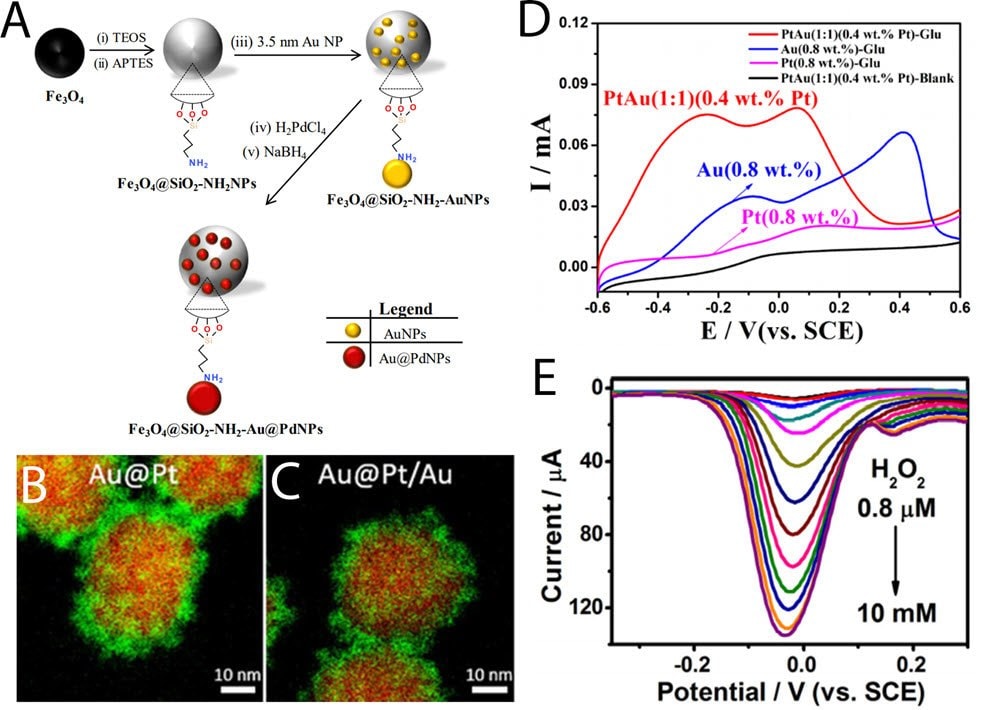 The AuPt-MoS2 nanoflowers enhanced the electrode’s performance. Like other Au-Pt structures, good stability was demonstrated (up to 20 days), with the response retaining 101.1% of the initial current response, while recording minimal interfering effects from other biomolecules.22

Because of its similar characteristics to Pt, Pd has also been used in conjunction with Au to substitute enzymatic biosensors in glucose monitoring. Au-Pd can enhance the catalytic activity of MoS2 nanosheets because of the metal-metal interactions, promoting ion transfer to nanosheets, increasing the surface charge, and improving the affinity towards substrates.23 Both factors contribute to the peroxidase-like activity of Au-Pd nanomaterials.

Andeniyi et al. developed nanomagnet-silica NPs decorated with Au-Pd. After synthesis of the magnetic NPs, Au-Pd was added via self-assembly. Interestingly, compared to horseradish-peroxidase, the peroxidase activity of the NPs was shown to be higher with a 70% increase in activity while following typical Michaelis-Menten enzyme kinetics, attributed to the synergistic interactions between Au and Pd. The addition of these nanostructures to a biosensor demonstrates improved selectivity, sensitivity, and stability compared to horse radish peroxidase — a known H2O2 catalysis (Figure 1A). Thus, these NPs have enhanced colorimetric biosensing ability for glucose detection.24

Furthermore, Li et al. synthesized MoS2 nanosheets modified with Au-Pd NPs using a facile thermal co-reduction method, coated onto glassy carbon electrodes. Impressively, the resulting electrode acted as a bifunctional sensor for both glucose and H2O2. The synthesized non-enzymatic glucose sensor showed optimal linear response and sensitivity, as in the H2O2 application. Additionally, the modified electrode showed high selectivity to both H2O2 and glucose (Figure 1E). After 15 days, the electrode’s performance indicated a 98% retention of the initial current response, providing strong stability. Determination of reproducibility for the five independent sensors found the RSD for glucose to be 8.2% and 7.5% for H2O2.25

The listed studies indicated the applicability and versatility of Au-based BMNPs in glucose detection. The resulting structures showed various ranges, thus offering customization to specific needs. Besides, the sensors remained selective toward glucose and stable in a biological environment. A summary of current advances in Ag-based and Au-based noble bimetallic NP structure for glucose detection is found in Table 1.

There is a rising demand for an alternative, enzyme-free approach to monitoring glucose levels to manage diabetes. The catalytic activity, selectivity, and stability of BMNPs structures combined with the synergistic effects of different metal elements have the potential to provide more accurate and reliable glucose detection, both directly and by indirectly measuring H2O2. Here, we detailed various advances in the synthesis, characterization, and performance of Ag-based and Au-based BMNPs sensors. Overall, these structures provide flexibility in detection range, sensitivity, detection limits, and exhibit high selectivity and stability, properties that are highly sought after for helping diabetes patients monitor hypoglycemia and hyperglycemia episodes. Nonetheless, despite promising results, in vivo experiments utilizing these modified electrodes still need to be performed. Therefore, future studies in the field should focus on validation in animals and ultimately to clinical translation. In the process, BMNPs have the potential to reduce invasiveness to the patient and improve device stability, two imperatives for diabetes management research and biosensing applications in general.