A mesoporous material is a material containing pores with diameters between 2 and 50 nm. The outstanding potential of mesoporous “carbonaceous” materials, in particular, has led to the search for a methodology that grants the desired control over surface chemistry and distribution of pore sizes; especially one that minimizes the formation of micropores, which are disadvantageous in applications that include chromatography1 and catalysis.2,3 One approach that achieves this goal is the templating method. In a typical procedure,4 mesoporous silica is filled with a carbon precursor (e.g. sucrose), which is subsequently carbonized through a series of high temperature processes. The template is then removed using hydrofluoric acid or caustic soda. This method is multi-step, energy intensive, involves highly corrosive chemicals, and the resulting materials have a significant proportion of micropores. Nature can help with this; starch, for example, has a naturally, nano-channelled biopolymer structure which can be utilized as a template. Cooking starch in water opens its internal structure forming an accessible mesoporous network. This utilizes nature’s ability to form nano-channelled biopolymer structures in the starch granules of plants.5,6 It was found that at low temperature, further treatment with acid and heating will then convert the expanded starch template into stable, nanostructured, mesoporous carbonaceous networks. This approach to the generation of nanostructures and new types of carbon-based materials with controllable physico-chemical properties helped us to produce the novel family of materials called Starbons®.7-9 Because of their complex surface molecular structure, Starbons® can be used in a variety of applications including chromatography, catalysis, environmental remediation, etc. and recently for making nanoparticles.

Our strategy is to synthesize mesoporous carbonaceous materials (hereinafter referred to as “Starbons®”) using mesoporous expanded starch7-9 as the precursor without the need for a templating agent. Starbon® synthesis utilizes the natural ability of the amylose and amylopectin polymer chains within starch to assemble themselves into organized, largely mesoporous structures. The method comprises three key stages (Figure 1). Firstly, starch (typically from corn) is gelatinized by heating in water and subsequently cooled to 5 ºC for one to two days to yield a porous gel block. The water in the block is then exchanged with ethanol, and oven dried to yield a predominantly mesoporous starch with a surface area of typically 180 m2g-1.10,11 In the final stage, the mesoporous starch is doped with a catalytic amount of an organic acid (e.g. p-toluenesulfonic acid (402885) and heated under vacuum.12 A variety of mesoporous carbonaceous materials of controllable surface and bulk characteristics have been produced by heating to different temperatures ranging from 100-1400 °C. These can be in a powder or a stable monolithic form as shown in Figure 1. 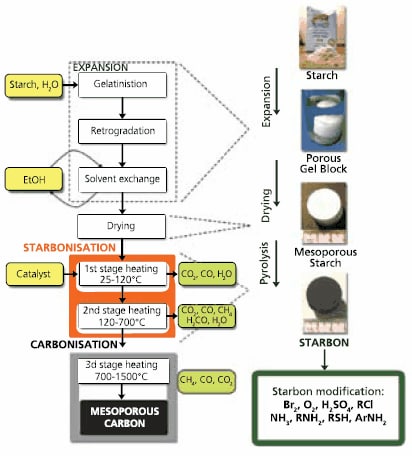 The porous structure of the Starbon® comes from the expanded starch, which prevents the problem of micelle collapse that occurs in micelle templated polymer methods for the synthesis of mesoporous carbons,13 and removes the need for synthesis of mesoporous templates such as silica to define the structure. As illustrated in SEM pictures of Starbon® and original mesoporous starch, the morphology of the sample particles during pyrolysis is largely preserved (Figure 2). 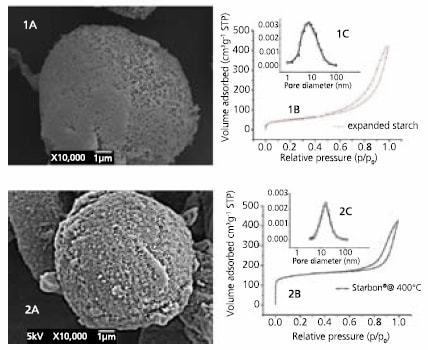 The total pore volume and the average pore diameter in the mesoporous region remain essentially constant throughout the carbonization process. The average pore diameter in the mesoporous region is around 10 nm indicating a predominance of mesopores in the structure of Starbons®. Although there is a substantial increase in the contribution of the microporous region to the total surface area, the actual volume that this corresponds to is small in comparison to the total mesoporous volume (Table 1). These structural properties make Starbons® particularly suitable for applications such as catalysis and chromatography.

The surface energy, Esurface, measured by the Dubinin-Astachov method, illustrates an overall increase as the preparation temperature rises. More starch-like properties are retained until about 150 °C, above which there is gradual change toward carbon-like properties.9,14 X-ray photoelectron spectroscopy (XPS) further supports these observations indicating a nearly linear increase of carbon/oxygen ratio on the surface from 1.2 for expanded starch to 8.5 for Starbon® prepared at 800 °C (Table 1).

A greater carbon-like character imparts an increased thermal stability. Thermogravimetric analysis demonstrates that, when heated, the Starbons® degrade to a lesser extent than starches (90% and 23% percent weight loss for starch and Starbon® prepared at 450 °C, respectively). Although the Starbons® prepared at lower temperatures begin to decompose earlier than starch under the same conditions, the thermal stability and the onset decomposition temperatures increase with increasing carbon character eventually exceeding the values for starch.

The changes in the chemical composition that occur during the preparation of Starbons® have also been investigated. Solid state 13C CP/MAS (cross-polarization/magic angle spinning) NMR spectra of the materials show that there are three main chemical changes in the transition from starch to Starbon®. In the first step (150-200 °C), a fraction of the -CH2OH groups in the starch condense to form ether groups. In the second step (200-300 °C) the remainder of the -CH2OH groups in the starch condense to carbonyl groups conjugated with olefinic groups to form aliphatic and alkene/aromatic functions. In the third step (>300 °C), the aliphatic groups are almost completely converted to aromatic p-systems. Diffuse reflectance FTIR spectroscopy confirms these findings; a progressive decrease in the concentration of -CH2OH groups, and an increase in aliphatic and finally aromatic functionalities is evident.15 These changes are similar to those reported previously for ordinary starch, but here the corresponding steps occur at much lower temperatures.16

The properties of Starbons® measured using TGA, 13C MAS NMR, DRIFT and XPS spectroscopy are summarized in Figure 3. It can be seen that from a starch to graphite-like structure above 700 ºC, there is a progressive increase in the hydrophobicity of the functional groups present. 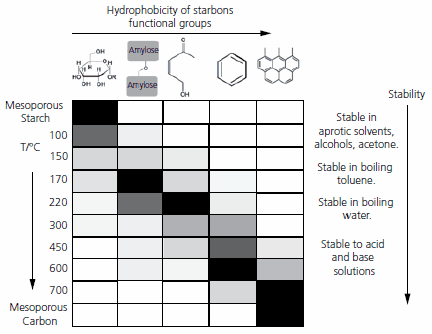 Figure 3.Influence of temperature of preparation on Starbon® surface functionality.

It should be noted, that Starbons® prepared in the temperature range of 100-700 °C also have a potential for chemical modification to alter their physical and chemical properties. The data obtained by 13C MAS NMR and DRIFT spectroscopy indicate the presence of functional groups typical to both starch and carbons. This means that the materials may potentially be modified chemically using methodologies suitable for starch10 (e.g. silylation, alkylation, esterification, etherification, etc.) as well as those suitable for carbonaceous materials (e.g. bromination, amination, etc.),17 which offers future opportunities for novel hybrids.

Information about the mechanism of starch decomposition gives us an opportunity to predict the optimal temperature of Starbon® preparation for a given application. The remaining starch functionality within Starbons® at temperatures up to 250 °C, enables the possible use of these materials in applications typical to starch such as the chromatographic separation of enantiomers.18 Preliminary studies have confirmed that they are effective as a stationary phase for liquid chromatography, allowing separation of a standard test mixture of substituted ferrocene compounds.

Low temperature prepared sulfonated aromatic carbonaceous materials have recently been shown to be effective solid acid catalysts. Since Starbons® prepared between the temperatures of 300 and 600 ºC have aromatic functionality, sulfonation of these materials should also result in useful solid acid materials. Remarkably, we have found that reactions of carboxylic diacids in aqueous alcohol demonstrate the excellent activities and particular characteristics of Starbon® acids.19,20 Esterification reactions of organic diacids in water were chosen because they can offer several interesting features. Firstly, (di)carboxylic acids are forecasted within the top biomass platforms for near future, large scale applicability. Secondly, esterifications are one of the most useful transformations for organic acids, especially for a dicarboxylic acid since the diester can be used as an intermediate in the manufacture of polymers. Thirdly, traditional esterification methods are unselective, and use soluble mineral acids that need to be separated at the end of the reaction, and lead to hazardous waste.

Starbon® acids, based on Starbons® prepared at different temperatures, show an optimum catalytic activity for each one of the diacids screened in the esterification, with sharply reduced activities below or above this maximum. Perhaps the most interesting feature of the Starbon® acids catalysis is the substratedependent maximum temperature in catalytic activity (Figure 4); activities peaked at ca. 400 °C for succinic acid (398055), 450 °C for fumaric acid (240745) and 550 °C for itaconic acid (I29204). 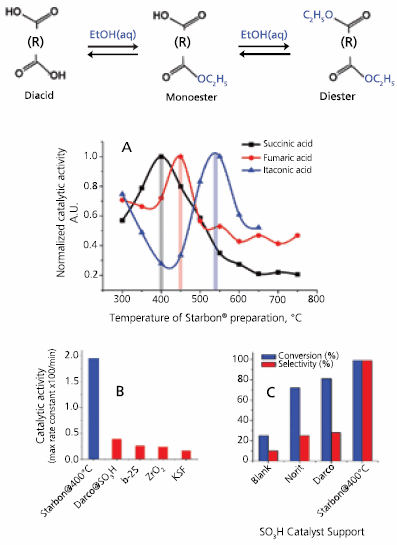 A further application for Starbons® is as a solid carrier for precious metal catalysts. We have found that palladium metal supported on Starbons® is an active catalyst for a model Heck reaction of iodobenzene (I7632) with methyl acrylate (M27301). Again, the importance of control over the surface chemistry of these materials is apparent; Starbons® prepared at 220 °C proved the most effective for this reaction.

We thank the EPSRC for financial assistance and colleagues in the York Clean Technology Centre for their intellectual input. We thank Mr. P. Elliott, and Ms. M. Stark for their analytical support and advice.