Vibrio cholerae causes cholera in humans, Vibrio parahaemolyticus and Vibrio vulnificus are the leading cause of seafood-associated gastroenteritis.

Vibrios are motile, curved or comma-shaped bacilli and have a single polar flagella with sheet proteins. They are often found in open water, freshwater and saltwater. Vibrios are facultative aerobe and Gram-negative bacterium and do not form spores. The metabolism can be oxidative and fermentative. Most species are oxidase-positive expect V. metschnikovii. Some vibrios such as Vibrio fischeri exhibit bioluminescence (Quorum sensing) under certain conditions. In most ways vibrios are close to Enterobacteriaceae, but share also some properties with pseudomonads. They can be differentiated from enteric bacteria by oxidase-positive reaction and motility. Differentiation from Pseudomonas can be made based on the ability of vibrios to undergo oxidative and fermentative metabolism.

Most vibrios are not fastidious and a simple C-source like glucose serves as an energy source. As it is a typically marine organism, most species require 2-4% NaCl or other salts and trace elements present in sea water for optimal growth. Some species are like Pseudomonas and can use diverse energy sources and show great versatility in their metabolism.

The widely used media for Vibrio isolation are TCBS Agar and Alkaline Peptone Water. However, accompanying sucrose-fermenting bacteria may pose a problem in the identification of Vibrio species on TCBS Agar[3]. The TCBS Agar contains a mixed indicator of bromothymol blue and thymol. This system reacts upon acid production from sucrose fermentation. On a chromogenic medium like HiCrome Vibrio Agar (Table 2), the color development by Vibrio species is not affected by the presence of colonies of other bacteria. This is because, the amount of color developed depends on the reaction of the bacterial ß-galactosidase with the substrate contained in the media. The TCBS Agar also contains a sodium thiosulfate and ferric citrate indicator system which detects the production of hydrogen sulphide.

Pepton from animal origin provides carbonaceous, nitrogeneous and essential nutrients to the Vibrio species to promote growth. High concentrations of sodium chloride in the medium are used to get an inhibitory effect on the accompanying microflora. Sodium thiosulphate, sodium citrate and sodium cholate are used as well to inhibit the growth of gram-positive and some gram-negative bacteria, but not members of Enterobacteriaceae. The strongly alkaline pH of the medium is also an important tool to get selectivity for Vibrio species. 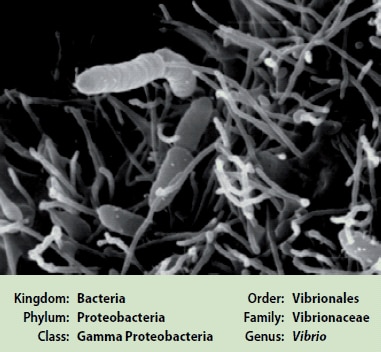 Figure 1.Vibrio vulnificus is the cause of seafood-related mortality. Scientists from Northwest Fisheries Science Center have isolated and characterized a key surface protein involved in the ability of Vibrio vulnificus to attach to shellfish, such as oysters (microscopic image from Northwest Fisheries Science Center, Seattle, USA)

V. cholerae is a non-invasive bacteria, affecting the small intestine by producing the cholera enterotoxins. The result is a life-threatening watery diarrhea because of activation of the adenylate cyclase in the intestinal cells. This reaction causes water and electrolytes from blood and tissues to be pumped into the intestinal tract. The rapid loss of fluids leads to dehydration, anuria, acidosis and shock. An additional loss of potassium ions may result in cardiac complications and circulatory failure. The mortality rate is very high (50-60%) if the disease is not treated. Infection source is the water or food contaminated with human feces. 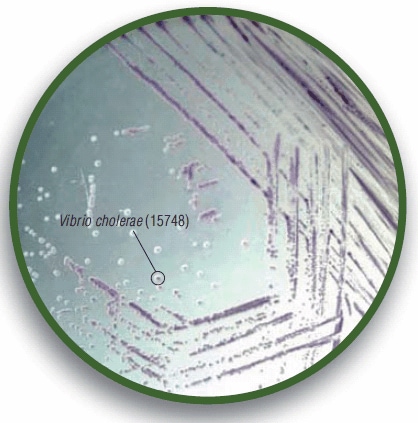 V. parahaemolyticus causes gastroenteritis. It is an invasive organism affecting primarily the colon tissue and excretes a presently unidentified toxin. The origin of an infection leads in most cases back to contaminated raw and improper refrigerated seafood or a fecal contamination of water and food.

V. vulnificus lives in warm seawater and is halophile, meaning they require salt for growth. Contaminated seafood which is eaten raw or is undercooked is in most case the source of infections and cause gastroenteritis, or a syndrome known as “primary septicemia.” Also open wounds that are exposed to seawater can lead to a wound infection. 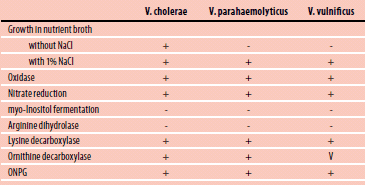