In an ideal living polymerization, all chains are initiated at the beginning of the reaction, grow at a similar rate and survive the polymerization: there is no irreversible chain transfer or termination. If initiation is rapid with respect to propagation, the molecular weight distribution is very narrow and chains can be extended by further adding monomers into the reaction. In a radical polymerization all chains cannot be simultaneously active. In RDRP, such as RAFT polymerization, these attributes are displayed in the presence of reagents that are capable of reversibly deactivating propagating radicals such that the majority of living chains are maintained in a dormant form, and reaction conditions that support a rapid equilibrium between the active and dormant chains (Figure 1).

Figure 1.RAFT Polymerization Schematic.4 The number of chains of each type shown here is not in proportion to that expected for a well-designed experiment. On average, all living chains grow simultaneously and have equal chain length because equilibration of the dormant and active chain ends is rapid with respect to propagation. A RAFT agent is represented as ′ZC(=S)S′.

Under these conditions, molecular weights can increase linearly with conversion, molecular weight distributions can be very narrow (Figure 2) and the majority of the polymerization product should comprise of dormant chains. 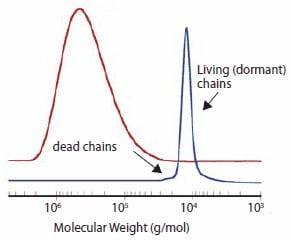 Figure 2.Typical molecular weight distributions for a conventional and a RAFT polymerization of styrene under similar experimental conditions.4

The mechanism of chain activation/deactivation in RAFT is shown in Figure 3. The reactions associated with RAFT equilibria are in addition to those (i.e., initiation, propagation and termination) that occur during conventional radical polymerization. In an ideal RAFT process, the RAFT agent should behave as a transfer agent. Termination is not suppressed by the RAFT process. Retention of the thiocarbonylthio groups in the polymeric product is responsible for the living character of RAFT polymerization and renders the process suitable for synthesizing block copolymers and end functional polymers. Removal or transformation of the thiocarbonylthio group may be required for some applications. A number of methods to accomplish the end group removal have been devised and can be readily incorporated into polymer syntheses.10, 12-16

Selection of the RAFT agent (ZC(=S)SR) for the monomers and reaction conditions is crucial for the success of a RAFT polymerization experiment. However, this should not be a daunting task. The effectiveness of RAFT agents is determined by the substituents R and Z and guidelines for selection have been proposed (Figure 3).1,3 Polymerization of most monomers can be well-controlled to provide minimal retardation and a high fraction of living chains by using one of just two RAFT agents. The first class is suited to more activated monomers (MAM) such as methacrylics, e.g., methyl methacrylate (MMA, Prod. No. M55909), methacrylic acid (MAA, Prod. No. 155721), hydroxypropyl methacrylamide (HPMAM) and acrylics, e.g., methyl acrylate (MA, Prod. No. M27301), acrylic acid (Prod. No 147230), acrylamide (AM, Prod. No. 148660), acrylonitrile (AN, Prod. No. 320137), styrene (St, Prod. No. W323306). The second class of RAFT agents is suited to less activated monomers (LAM) such as vinyl acetate (VAc, Prod. No. V1503), N-vinylpyrrolidone (NVP) or N-vinylcarbazole (NVC). Recently, a switchable RAFT agent that can be used to control polymerization of both MAMs and LAMs has been described.8,9 Requirements for specific end-functionality or polymer architecture may dictate the use of other RAFT agents.10,11

With appropriate choice of reagents and polymerization conditions RAFT polymerization can be used in the synthesis of well-defined homo, gradient, diblock, triblock and star polymers, as well as more complex architectures including microgels and polymer brushes. Applications now being reported range from novel surfactants, dispersants, coatings and adhesives, to biomaterials, membranes, drug delivery media, electroactive materials and other fields falling under the nanotechnology umbrella.

Good control over polymerization of a MAM is observed with trithiocarbonates (Z=S-alkyl, e.g., 4-6). Z is preferably based on a thiol with low volatility. Aromatic dithioesters (Z=aryl, e.g., 9, 10) are amongst the most active RAFT agents and show general utility in the polymerization of MAMs.1, 2 However, the aromatic substituted RAFT agents may give retardation when used in high concentrations and are more sensitive to hydrolysis and decomposition induced by Lewis acids.17,18 Alkyl-substituted RAFT agents (4-6) can be tried if hydrolysis is a concern. The bis(thiocarbonyl) disulfides 7 and 8 are useful as precursors to the tertiary RAFT agents and can be used to form a RAFT agent in situ during polymerization.19

R must efficiently reinitiate polymerization and must be a good homolytic leaving group with respect to the propagating radical.20R⋅ must also be efficient in reinitiating polymerization: it should add to monomer rapidly with respect to the rate of propagation. A good choice for the case of acrylates and acrylamides is the RAFT agent 6 with R=cyanomethyl. The choice of ′R′ is critical in the case of methacrylates. In some of the most effective RAFT agents R is tertiary cyanoalkyl (e.g., 4, 5, 9). The utility of the RAFT process is illustrated by the following example of RAFT polymerization of methyl methacrylate (MMA). A series of high (80-100%) conversion MMA polymerizations were carried out at 90 °C with 1,1′-azobis(1-cyclohexanecarbonitrile) initiator, and using an ~60-fold range of concentrations of S-dodecyl S-(2-cyano-4-carboxy)but- 2-yl trithiocarbonate 5.10 The molecular weight distributions observed after six hours are shown in Figure 5. The molecular weights, ranging from 2,600 to 125,000, agree with expectation based on the concentrations of RAFT agent and initiator used.10 All samples have narrow molecular weight distributions (PDI <1.2). 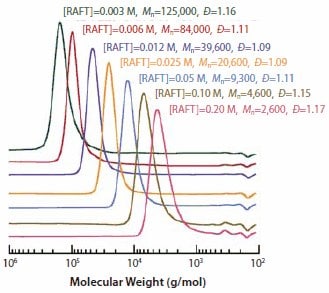 Figure 5.Molecular weight distributions for PMMA formed by high conversion RAFT polymerization of MMA (6.55 M in benzene) with 1,1’-azobis(1-cyclohexanecarbonitrile) (0.0018 M) as initiator and various concentrations of RAFT agent 5 for 6 h at 90 °C.10

The less active RAFT agents with Z=NR′2 (dithiocarbamates), Z=OR′ (xanthates) and R′ = alkyl or aryl offer good control. The more active RAFT agents Z=R (dithioesters) or SR (trithiocarbonates) inhibit polymerization of a LAM. The choice of R group is also critical because most monomers in the class have a high propagation rate constant. Inhibition periods due to slow reinitiation are expected for RAFT agents such as 12 and 13. One preferred RAFT agent is 11. Examples of VAc polymerization with 11 are shown in Table 1.7 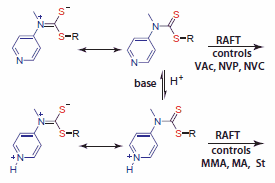 Figure 6.RAFT Agent capable of polymerization of both LAMs and MAMs controlled by pH.