The immune system protects the body from disease by resisting the invasion of foreign molecules into its cells, for example peptides and proteins are hydrolyzed by proteolytic enzymes; nucleic acids are hydrolyzed by nucleases; and most small molecules are eliminated in the liver and kidneys. This immune reaction protects the body from disease but can also cause many drugs to become inactive. PEGylation is one of the most common methods of drug delivery employed to prolong elimination half-life and reduce drug immunogenicity.

Polyethylene glycol (PEG) is a water-soluble synthetic polymer consisting of repeating ethoxy units: -(CH2-CH2-O)-. PEGylation, the covalent conjugation of a PEG derivative to another molecule, has proven to be a safe and effective method of drug modification for drug delivery applications and has gained acceptance by regulatory agencies for use in a variety of commercialized products. PEGylation can protect a drug from being hydrolyzed by enzymes, improve the Pharmacokinetic/Pharmacodynamic (PK/PD) profile and stability, and reduce drug toxicity while increasing water solubility.

Based on molecular structure, PEG materials can be classified into three main categories: linear PEGs, multi-arm PEGs, and branched PEGs (Figure 1). Linear PEGs such as methoxy PEGs (mPEGs), as well as heteroand homo-bifunctional PEGs, are used frequently for PEGylation of peptides, proteins, siRNA and modification of other small molecules, and for preparation of drug delivery systems such as nanoparticles. Multi-arm PEGs have similar physicochemical properties as linear PEGs, are used to increase drug loading and are used in the preparation of hydrogels by crosslinking.1 PEGylation with branched mPEG chains provides improved stability against enzymatic digestion compared to PEGylation with linear PEGs.2–4

There are two types of branched PEG materials currently used in the market: U-shape PEGs and Y-shape PEGs (Figure 2). The stability of the enzymes ribonuclease, catalase, asparaginase, and trypsin to proteases after modification with U-shape PEGs and linear PEGs was compared by Monfardini et al.2 at different pH and temperatures. Their results showed that U-shape PEG-modified enzymes exhibited better stability than linear PEGs. Zhou et al.3,4 reported that in vitro pharmaceutical activity of the Y-shape PEG modified proteins, interferon α2a, α2b and rhGH, is higher than that of U-shape PEG modified enzymes, potentially as a result of the difference in the chemical structure of the two branched PEGs (Figure 2). 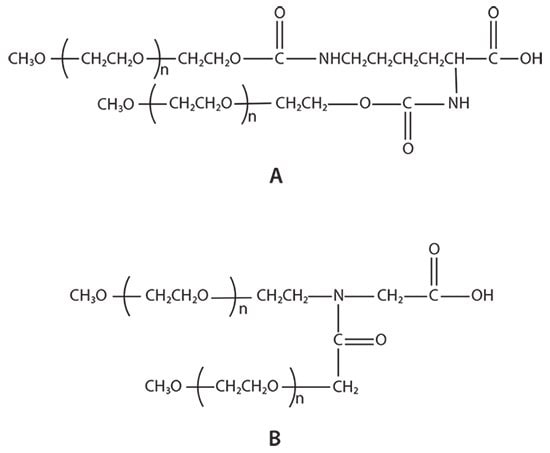 Applications of Y-shape PEGs for PEGylation of Cancer Therapeutics

Many molecules with antitumor activity require modification prior to their use in cancer treatment due to their hydrophobicity, short halflife, toxicity, and immunogenicity. PEGylation enables the use of these molecules in the treatment of cancer by reducing or avoiding these negative attributes. Several PEG-modified drugs (such as Caelyx™, PegIntron®, CIMZIA®, PEGASYS®, and Oncaspar™) are already on the market, while many others are in different stages of clinical research studies.

Progress on research and development of a number of cancer therapeutics modified using Y-shape PEGs has recently been reported. For example, Li et al.5 developed dual MMP7 (matrix metalloproteinase 7) proximity-activated and folate receptor-targeted nanoparticles (NPs) for siRNA delivery. This siRNA nanocarrier, which forms a pH-responsive, endosomolytic core and two coronas, is self-assembled from two polymers, folic acid (FA)-PEG and Y-shape PEG-PAT (proximity-activated targeting, MMP-cleavable peptide). The corona of the Y-shape PEG shields against nonspecific interactions within the blood. When PAT is cleaved within an MMP-rich environment (such as inside metastatic cancer tissues), the Y-shape PEG is removed, exposing the underlying FA and making it accessible for folate receptor-mediated NP uptake. Using breast cancer cells as a target, the authors noted that the NPs show undetectable levels of cytotoxicity, whereas the protein-level knockdown of a model gene is greater than 50%.

Y-shape PEG-TNF-α and Y-shape PEG-vcTNF-α, both of which use a cathepsin B-sensitive dipeptide (valine-citrulline, vc) to link Y-shape PEG and TNF-α, were prepared by Dai et al.7,8 Tumor necrosis factor-α (TNF-α) has a very potent biological activity and is used to directly kill tumor cells. However, its medical application is limited due to serious side effects, rapid clearance from circulation, and unspecific distribution among tissues after intravenous administration. Researchers found that Y-shape PEG-vcTNF-α induces higher cytotoxicity and an ~10-fold increase in antitumor activity compared to Y-shape PEG-TNF-α. In vivo pharmacokinetics studies demonstrated that the half-life of Y-shape PEGvcTNF-α is similar to Y-shape PEG-TNF-α and 70-fold longer than that of native TNF-α.7 Another cathepsin B-sensitive Y-shape PEG-modified TNF-α (Y-shape PEG-vc-PABC- TNF-α, Y-shape PEG-vc containing a p-amino benzyl carbonyl spacer) showed similar properties.8

Deloisa et al.9 studied the PEGylation reaction of laccase and the enzymatic activity of PEG-laccase. Laccase is a copper-containing oxidoreductase that catalyzes the oxidation of phenolic compounds with antiproliferative activity toward tumor cells. The researchers found that neither molecular weight nor type of PEG structure (such as linear or branched) had a significant impact on the laccase activity. After PEGylation, the laccase activity with ABTS (2,2΄-azino-bis(3-ethylbenzothiazoline-6-sulfonic acid)) was maintained at nearly 100%.

The protein G-CSF stimulates the survival, proliferation, differentiation, and function of hematopoietic cells. A recombinant form of G-CSF can be employed as an adjuvant to certain cancer therapies to accelerate recovery from neutropenia after chemotherapy, allowing higher-intensity treatment. Wang et al.10 synthesized Y-shape PEG-modified G-CSF using lysine-specific PEGylation. In the mouse study of the treatment for in vivo 5-fluorouracil-induced neutropenia, Y-shape PEG-G-CSF showed less dosing frequency and dosage compared to Filgrastim™. The half-life of Y-shape PEG-G-CSF was 19-fold longer than Filgrastim™ as measured in cynomolgus monkeys.

Applications of Y-shape PEGs for PEGylation of Antibiotics and Antivirals

Y-shape PEGs have been employed for PEGylation of antibiotics and antivirals that exhibit in vivo stability problems. Marcus et al.12 developed a reversible PEGylation process for gentamicin. Reversibly PEG-modified drugs are capable of prolonged drug release in vivo while retaining drug activity of the unmodified drug. For example, PEG-gentamicin regains full antibacterial potency upon incubation in vitro; following systemic administration to rats, the half-life of PEG-gentamicins are 7 to 15-fold greater than the half-life of systemically administered nonderivatized gentamicin.

Interferon (IFN) is a broad-spectrum antiviral agent that indirectly suppresses a virus by producing antiviral protein through cell surface receptors to inhibit viral replication. IFN can also enhance the activity of natural killer cells (NK cells), macrophages, and T lymphocytes and the effectiveness of antivirals. For example, Zhou et al.3,4 describe the development of Y-shape PEG-IFN α2a and Y-shape PEG-IFN α2b. The in vivo half-lives of Y-shape PEG-IFNs were more than 10-fold longer than the half-life of the unmodified IFN, as measured in cynomolgus monkeys.

Applications of Y-shape PEGs for PEGylation of Cocaine Esterase

Narasimhan et al.14 report that the T172R/G173Q mutant of cocaine esterase (CCRQ-CocE) improves its in vivo residence time from 24 to 72 h when it is modified by Y-shape PEG. CCRQ-CocE has an improved thermostability, retaining over 90% of its activity after 41 days at 37 °C, while the in vitro half-life of wild-type cocaine esterase was only 12 min at 37 °C.

Through molecular modeling and dynamics simulation, Fang et al.15 designed and characterized a promising new mutant of E172−173 with extra L196C/I301C mutations, denoted as enzyme E196−301. In vivo tests showed that Y-shape PEGylated E196–301 could fully protect mice from a lethal dose of cocaine of 180 mg/kg, LD100, for at least 3 days, whereas the unPEGylated E196–301 could only protect mice for less than 24 h.

Other Applications of Y-shape PEGs for PEGylation

Y-shape PEGs have also been employed for PEGylation of nucleotides, Cp40, and rhGH, with applications in the treatment of rheumatoid disease, transplant health, and tissue growth.

Interleukin 6, or IL-6, stimulates and involves cellular proliferation, differentiation, and function of immune response. IL-6 and IL-1 are involved in the inflammatory response and fever reaction. SL1026, modified by Y-shape PEG, is a slow off-rate modified aptamer, SOMAmer, antagonist of IL-6, which neutralizes IL-6 signaling in vitro and delays the onset and reduces the severity of rheumatoid symptoms, per Hirota et al.16 Administration of SL1026 in cynomolgus monkeys delays the progression of arthritis. SL1026 also inhibits IL-6-induced STAT3 phosphorylation ex vivo in T lymphocytes from human blood and IL-6-induced C-reactive protein and serum amyloid A production in human primary hepatocytes. The reported therapeutic effects of SL1026 are similar or slightly better than tocilizumab, which makes it a potential agent for the treatment of rheumatoid arthritis.

Complement component 3 (C3) inhibition is known to be vasculoprotective in transplantation studies. In the genetic absence of C3, however, complement component 5 (C5) convertase activity leads to the generation of C5a (anaphylatoxin), a promoter of vasodilatation and permeability. Khan et al.17 prepared a specific C5a inhibitor, NOX-D19, a 44 nucleotide L-RNA modified by Y-shape PEG, and found that therapy with this agent prevents microvascular pathology. Since microvascular dilatation and permeability increases during allograft rejection, vascular integrity is an important indicator of transplant health.