Environmental concerns are driving the replacement of volatile organic solvents by water and aqueous mixtures. This change often creates challenges because many organic molecules show low water solubility. In addition, in some applications, it is necessary to mix hydrophilic and hydrophobic components in one formulation, requiring the use of solubility modifiers. Dendrimers can provide a solution in both scenarios. Dendrimers are core-shell nanostructures with precise architecture and low polydispersity, which are synthesized in a generation-by-generation fashion around a core unit, resulting in a high level of control over size, branching points, and surface functionality (Figure 1).1 The ability to tailor dendrimer properties to the needs of a guest molecule makes them ideal carriers for molecular encapsulation, allowing dissolution of hydrophobic materials in water and mixing of hydrophilic and hydrophobic compounds, for example in catalytic applications.2 Figure 1.Schematic representation of a G2 dendrimer with 3-fold branching. PAMAM dendrimers have 2-fold branching, resulting in 2x increase in number of surface groups with each generation, G.

In this article, we demonstrate the ability of dendrimers to improve water solubility, using two poorly water-soluble drugs as model materials. Low water solubility and, therefore, poor bioavailability, are a major challenge in drug delivery.3 The anti-cancer drug cisplatin and the non-steroidal antiinflammatory drug indomethacin have been encapsulated into STARBURST® poly(amidoamine) (PAMAM) dendrimers, and their encapsulation efficiency and release profiles have been studied. Compared to control experiments without dendrimers, dendrimer-drug formulations showed up to 37-fold drug solubility enhancement.

STARBURST® PAMAM dendrimers are products of Dendritic Nanotechnologies, Inc. and currently available through our portfolio. All other reagents and solvents are available and were used as received.

Dendrimers were dissolved in deionized (DI) water and mixed with excess drug. These suspensions were briefly exposed to ultrasonication, and then incubated overnight at 37° C and 100 rpm in a shaking water bath. After equilibration to ambient temperature, the dendrimer-drug suspensions were filtered through a 0.2-μm nylon syringe filter to remove excess solid drug. Non-encapsulated drug was removed by dialysis using a 1-kDa cutoff membrane against DI water at 4° C for 30 min. Drug samples were freeze-dried and analyzed for encapsulated drug content by UV spectroscopy at 320 nm using a Perkin Elmer™ Lambda 2 UV/VIS Spectrophotometer (indomethacin) or by inductively coupled plasma (ICP) spectroscopy (cisplatin). Procedure was performed in triplicate.

Dendrimer-drug conjugates were re-dissolved in DI water or saline solution and placed in a dialysis bag using a 1-kDa cutoff membrane at 37° C. At certain time intervals, aliquots were removed from the outer dialysis compartment, freeze-dried and analyzed by UV spectroscopy or ICP as described above.

Encapsulation of cisplatin is independent of dendrimer core and generation as evident from Table 1 (P > 0.05). The effect of drug/dendrimer molar ratios on the percentage of Pt content was studied using dendrimer G3.5 with diaminoethane (EDA) core and sodium carboxylate surface groups. Increasing the cisplatin/dendrimer molar ratio resulted in enhanced Pt content of the dendrimer formulations (Table 2). The effect of dendrimer-to-cisplatin loading on in vitro release was studied using dendrimer G3.5 (Figure 2). The release rate was correlated to the amount of drug loaded into the dendrimers, with fast release at high loading but slow release (long retention time) at low loading. Long retention is desirable in technical, catalytic applications. In vitro release of cisplatin was independent of the dendrimer core size. The release profiles in saline solution (high ionic strength) were similar to the release profiles in DI water (data not shown). 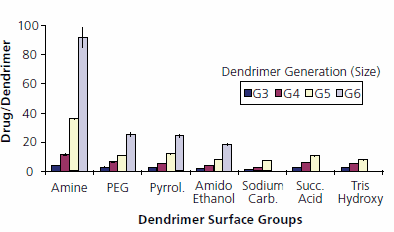 Release of the drug from the dendrimer matrix depends upon the nature of the drug and its interactions with the dendrimer. For example, the repulsive interaction between the dendritic carrier and indomethacin mentioned above results in fast release of this drug from PAMAM® dendrimers G4 with carboxylate surface groups compared to cisplatin (56.9% versus 25.3% after 5 h). Consequently, release profiles can be tailored to the application needs by choice of the dendrimer surface groups (e.g., amine versus carboxylate) as well as the drug/dendrimer molar ratio (Figures 2 and 4). Judicious selection of the dendrimer therefore can control the release profile of the encapsulated material.

Formulation of poorly water-soluble drugs with STARBURST® PAMAM dendrimers resulted in increased water solubility, and therefore, enhanced bioavailability of these drugs. This behavior has been demonstrated for two drug classes, small metal ion containing drugs such as cisplatin, and organic molecules such as indomethacin. However, these properties of dendrimers are not restricted to drug molecules but can also be applied to catalysts and organic molecules, where dendrimers function as solubility enhancer and modifier, allowing to mix otherwise immiscible materials.2 Dendritic Nanotechnologies’ new Priostar™ dendrimer family provides these carriers at low cost and enhanced thermal and hydrolytic stability compared to STARBURST® PAMAM dendrimers, making them ideal candidates for commercializing industrial applications.