In recent years, array-based Comparative Genomic Hybridization (aCGH) has been refined to determine chromosomal changes at progressively higher resolutions1. This evolving technology is, however, somewhat hampered by the large DNA input requirement—a minimum of 150,000 copies of a human genome, or 0.5 μg, are generally needed per sample to process one CGH array. GenomePlex® Whole Genome Amplification (WGA) provides a means to decrease the amount of required DNA for aCGH, which could expand the application of the technology to analysis of nanogram quantities of DNA, or even single cells. Furthermore, and perhaps more interestingly, GenomePlex WGA enables researchers to representatively amplify the genome from samples that have been fragmented to an average size of less than 1 kb. This feature may enable CGH analysis of formalin-fixed, paraffin-embedded (FFPE) samples that were previously thought to be unusable due to their high level of DNA degradation. In this study, we demonstrate successful use of WGA DNA on Agilent aCGH microarrays. The WGA product has also been demonstrated to work on BAC arrays 2, 3 and other oligo array4 platforms.

DNA samples were amplified using the GenomePlex WGA kit (Product WGA2). The amount of DNA input into WGA reactions was 50 ng, except for the titration experiment where the input amount was as indicated in the text below. After WGA, excess primers and dNTPs were removed by purifying the WGA product using the GenElute PCR Clean-Up Kit (Product NA1020).

Limiting amounts of starting template can inhibit array CGH analyses of certain precious samples such as laser capture microdissected cells or needle biopsies. The experiment described here was designed to demonstrate that GenomePlex WGA can be used to generate high-quality aCGH data across a range of genomic DNA inputs (1-100 ng). WGA yields for all inputs were in the range of 5-10 μg as measured by UV spectrophotometry (data not shown). DNA size distributions were between 200 and 5000 bp as measured by agarose gel analysis (Figure 1, lanes 4-7), although the size distribution for WGA product from reactions with 1 ng input was shifted slightly lower (Figure 1, lane 7). Microarray performance metrics values such as the Derivative LogRatio Standard Deviation (DLRSD), Signal-To-Noise Ratio (SNR) and Background Noise (BGNoise) demonstrated that the aCGH results from varying inputs into WGA reactions (1–100 ng input) were comparable (Table 1). The DLRSD value for the 1 ng input was higher than that for other inputs, but was within the acceptable range (see Table 1 footnote). The low probe-to-probe log ratio noise values indicate that chromosomal aberrations can be reliably detected across this wide range of input DNA masses. 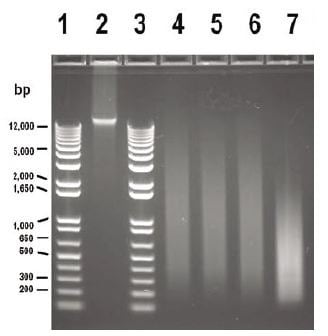 Figure 2.CGH Analytics ideograms illustrating input titration data from Agilent Human Genome CGH 105A microarrays. Dye swap plots were presented side-by-side in each panel (A-F). Polarity +1 (Cy5-HT29/Cy3-Female) is shown on the left and polarity -1 (Cy5-Female/Cy3-HT29) is shown on the right. These CGH plots compare normal female DNA vs. HT29 human colon carcinoma cell line having a known deletion across the p arm (horizontal shift to left of zero line), an amplification of the q arm in the q23.3-24.33 region (horizontal shift to right of zero line), and a focal deletion in q23.1. Dye swaps (switching the dye labels between samples) were performed on these samples to demonstrate that the results were not an effect of dye bias. A: amplified from 100 ng input, B: amplified from 50 ng input, C: amplified from 10 ng input, D: amplified from 1 ng input, E: MilliporeSigma amplified from 10 ng input, F: unamplified

CGH Analytics software was used to analyze aberration patterns in HT29 DNA amplified across the range of inputs (Figure 2). Chromosome views for all input levels consistently revealed all known aberrations including a deletion across the 8p arm, an amplification of the 8q arm, and a focal deletion in 8q23.1. These data suggest that amplification integrity is maintained across a wide range of inputs into WGA. Array results generated by MilliporeSigma compare HT29 DNA to that from a single male patient without a history of cancer, whereas the Agilent data was generated by comparing chromosomal differences between HT29 and a pooled reference of healthy individuals. The MilliporeSigma data showed higher background signal values as well as lower signal-to-noise values for all inputs in comparison to the Agilent data (Table 1), which may be best explained by copy number variation; the pooled reference sample used in the generation of Agilent data eliminates much of this variation. In summary, the data indicates that when limited by the amount of available template, GenomePlex amplification from as little as 1 ng of starting genomic DNA can generate consistent CGH results.

Many researchers would like to perform aCGH on samples of questionable integrity, such as genomic DNAs from FFPE, frozen, and other archived tissues. The purposes of the following experiment were firstly to evaluate the feasibility of amplifying low molecular weight DNA using GenomePlex, and secondly, to determine if DNA amplified from fragmented DNAs would yield acceptable aCGH results. Sonicated DNA of varying sizes was used as a source for fragmented DNA. Size integrity distributions were determined by agarose gel analysis (Figure 3). WGA was performed using both intact and fragmented HT29 DNA and aCGH results are shown in Figure 4, revealing all well known HT29 aberrations on chromosome 8. Furthermore, the microarray data quality metric values were highly correlated between intact DNA and fragmented DNA (Table 2). The effects of fragmentation were further evaluated and verified by comparing male and female samples as recorded in table 2. These results indicate that sheared DNA of at least 400 bp in average size can be amplified and subsequently analyzed via Agilent microarrays to produce results comparable to those obtained using high molecular weight intact genomic DNA. 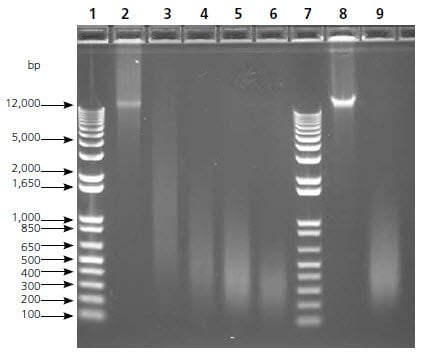 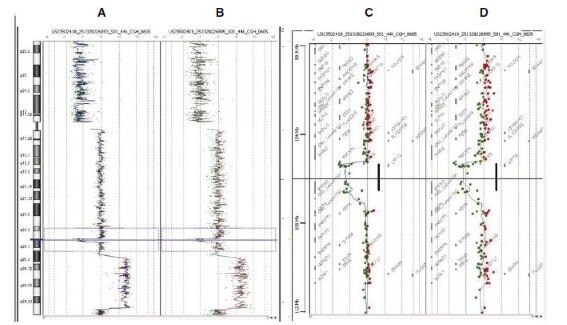 1Applies to male versus female comparison only. NA, not applicable.
*See Table 1 footnote for further explanation.

1 For male versus female comparison only. Not included in CGH Analytics 3.4 software QC Metrics.

GenElute is a a trademark of Merck KGaA, Darmstadt, Germany and/or its affiliates. All other trademarks are the property of their respective owners. Detailed information on trademarks is available via publicly accessible resources.