Scientists spend considerable time and effort on the development of functional materials and systems. On the other hand, Nature has taken many millenia to evolve highly functional materials, which can be referred to as biomaterials. Perhaps as a reflection of the huge difference in development times, artificial materials are often inferior in their efficiencies and specificities when compared with biomaterials. Therefore, from the point of view of a rational materials design, the integration of biomaterial functions into desired systems should be advantageous. Unfortunately, biomaterials are prone to either attenuation of properties or decomposition under harsh chemical and physical conditions. Of course, biomaterials have not evolved in Nature for use as artificial device components. A mild, yet adaptable approach is necessary for successful immobilization of biomaterials within artificial structures. One possible method involves accommodating the biomaterials in biomembrane-like thin films such as Langmuir-Blodgett (LB) films or self-assembled monolayers (SAMs). Although these membranes serve as reasonable media for biomaterials to function, the films are neither simple to construct nor versatile. Recently, layer-by-layer (LbL) assembly has emerged as a versatile, gentle and, simple method for immobilization of functional molecules in an easily controllable thin film morphology.1,2 In this short review, we introduce recent advances in functional systems fabricated by using the mild, yet adaptable LbL technique.

Outline of LbL: why and how gentle for biomaterials?

A general process of LbL assembly is illustrated in Figure 1a using assembly between cationic polyelectrolytes and anionic proteins as an example. Deposition of the cationic polyelectrolyte at the negatively charged surface of a solid support usually causes over-adsorption, resulting in surface charge reversal. Subsequent adsorption of anionic proteins again reverses the surface charge so that alteration of the surface charge permits continuous fabrication of the layered structure. Because this mechanism can be applied to various charged substances, there is a vast choice of available biomaterials including proteins, nucleic acids, saccharides, and virus particles. The assembly process, resulting in films of nanometer-scale thickness, can be conducted in an aqueous solution under mild ambient conditions, using only beakers and tweezers. The driving force for the LbL assembly is not necessarily limited to electrostatic interaction. Other interactions such as hydrogen bonding and metal coordination can be used for the assembly.3 Biospecific interactions, for example recognition between lectins and sugars, could provide more specific film construction.4

A milestone in LbL assembly innovation was the introduction of template synthesis to this process.5 Figure 1b illustrates LbL assembly preparation involving colloidal particles and subsequent hollow capsule formation. In this strategy, the LbL films are assembled sequentially, similarly to the conventional LbL assembly, but on a colloidal core. Destruction of the central particle core results in hollow capsules. Polyelectrolyte wrapping by LbL assembly on enzyme crystals followed by dissolution of the enzyme crystals, leads to extremely high enzyme loading in a nano-sized capsule.6 If LbL assembly of biomaterials is conducted at the interior of a porous alumina template, subsequent dissolution of the template results in formation of microtubes composed of biomaterials.7 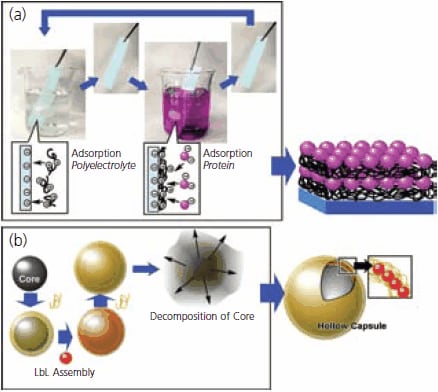 The wide freedom available in LbL film construction can be advantageous for the preparation of thin-film enzyme reactors designed for specific reaction sequences. Figure 2 shows one successful example of a dual-enzyme reactor containing glucose oxidase and glucoamylase prepared on an ultrafilter.8 When a substrate starch solution was passed through the reactor, hydrolysis of the starch glucose bond by glucoamylase produced glucose, that was subsequently converted to gluconolactone by glucose oxidase with H2O2 as a byproduct. Reactor efficiency can be optimized by adjusting the number of layers, layering sequence, and layer separation. 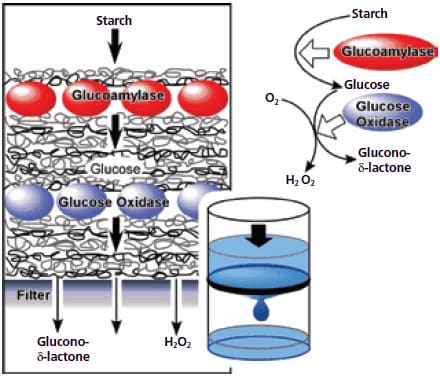 Performance of single-enzyme reactors with glucose oxidase, prepared by LbL assembly, when compared against LB films containing the same enzyme, showed significant advantages.9 Increases in thickness in the former did not alter efficiency of the enzyme reaction, while the enzyme activity in thicker LB films was drastically reduced. Polyelectrolyte layers used in LbL assembly seem to be more permeable to the reaction precursor than the condensed lipid phase in LB films. Durability, thermostability, and stability against pH changes were also examined for the single component LbL films. The LbL reactor with glucose oxidase showed increased stability in all these aspects. Gentle fixing of the enzyme molecules within a soft polyelectrolyte cushion could be acting to prevent conformational changes even upon external perturbations of the reactor.

Sensor applications are some of the most important potential uses for LbL biomaterial assemblies. The LbL method can be easily used to fabricate thin films of active enzyme structures on solid surfaces of sensor device components such as electrodes or transistors. For example, Rusling and coworkers performed pioneering research in this field, which they described in a recent account.10 They developed a detection system for DNA damage using DNA and enzyme (myoglobin or cytochrome P450).11 The enzyme in the film generates the metabolite styrene oxide from styrene upon activation by hydrogen peroxide, and the resulting styrene oxide reacts with double stranded DNA in the same film. This process can be regarded as mimicking metabolism and DNA damage in human liver. Square wave voltammetry based on electrochemistry of a Ru-complex and a Co-complex was used to detect DNA damage. The methodology could find wide application for in vitro screening of organic precursor and metabolite toxicities.

Because the LbL technique is very simple and versatile, many practical applications will be developed in the near future. Some biomedical applications in drug delivery and cell technology have already been realized.

Many approaches were developed to make capsule structures using the LbL method. The capsules can be used as carriersfor controlled delivery and release of drugs.12 For example, Lvov and coworkers devised a unique approach for DNA encapsulation at the interior of a biocompatible polyelectrolye microshell, with retention of the natural double-helix structure of the DNA (Figure 3).13 DNA degradation is a serious problem in gene delivery. This makes it critical to encapsulate DNA in an appropriate carrier, prepared from environmentally friendly materials. In their method, MnCO3 particles, used as the template core materials, were suspended in DNA solution. Addition of spermidine solution into the stirred MnCO3/ DNA mixture caused precipitation of a water-insoluble DNA/ spermidine complex onto the MnCO3 particles. The mixed component MnCO3/DNA/spermidine cores were then covered by an LbL assembly comprised of biocompatible polyarginine and chondroitin sulfate. Subsequent core dissolution was carried out in two steps. First, MnCO3 template particles were dissolved in deuterated 0.01 M HCl, resulting in biocompatible capsules containing DNA/spermidine complex, with the second step involving further treatment with 0.1 M HCl resulting in decomposition of the DNA/spermidine complex. After the second process, low molecular weight spermidine was released into the capsule interior to leave a DNA-entrapped biocompatible capsule. As the permeability of entrapped materials through the polyelectrolyte membranes can be regulated by perturbing factors, such as pH change, additional solvent, and temperature jump, controlled release of the trapped DNA is possible. 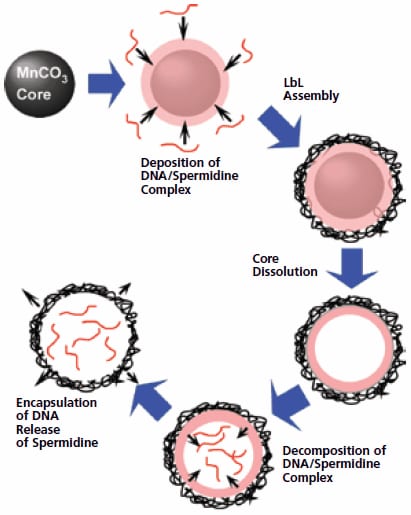 Use of planar LbL films in drug delivery applications was also proposed. For example, Lynn and coworkers prepared LbL films up to 100 nm thick containing plasmid DNA, encoded for enhanced green fluorescent protein, with a synthetic degradable cationic polymer on the surfaces of planar silicon and quartz substrates.14 Upon degradation of the latter polymer, the plasmid DNA from the LbL films was released and became transcriptionally active to promote the expression of high levels of enhanced green fluorescent protein in the cell. Recently, Yu, Ariga, and coworkers reported hollow-capsulecontaining LbL films for controlled materials release.15 The prepared films referred to as “mesoporous nano-compartment films” were composed of silica particles and hollow silica capsules (Figure 4). The resulting mesoporous nanocompartment films possess special molecular encapsulation and release capabilities so that stimuli-free, auto-modulated, stepwise release of water or drug molecules was achieved through the mesopore channels of robust silica capsule containers embedded in the film. Reproducible stepwise release of entrapped molecules was observed that originates in non-equilibrated rates between evaporation of water from the mesopore channels to the exterior and the capillary penetration of water from container interior to the mesopore channels. These nano-compartment films are promising materials for drug delivery since they allow gradual release of therapeutic agents with likely related improvements in their efficacy. 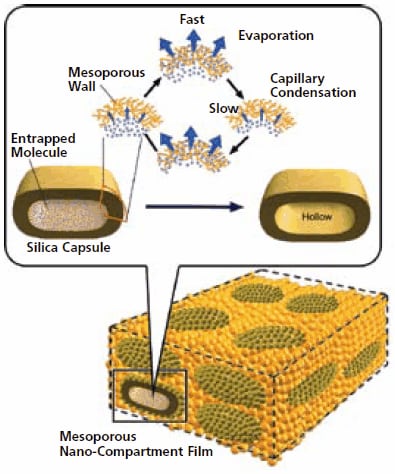 Applications of the LbL method in cell technology have very demanding prerequisites. Several pioneering research works related to this have been summarized in a recent review by Kotov and coworkers.16 For example, Jan and Kotov demonstrated the potential use of LbL films in stem cell technology, where the differentiation of environment-sensitive neural stem cells, both as neurospheres and single cells, on LbL films of carbon nanotubes and polyelectrolytes was examined.17 Benkirane-Jessel and coworkers demonstrated control of cellular apoptosis by bone morphogenetic protein and its antagonist, Noggin, which were embedded in LbL films of poly-L-glutamate (P4761)and poly-L-lysine (P9404).18 This is a good demonstration illustrating the possibility of in situ control of apoptosis during tooth differentiation, mediated by reagents embedded in a polyelectrolyte multilayer film. De Smedt and coworkers conducted in vivo studies on cellular uptake, degradation, and biocompatibility of LbL polyelectrolyte microcapsules that had been fabricated from dextran sulphate (D6924) and poly-L-arginine (P7762) layers on a template of calcium carbonate microparticles.19 Most of the microcapsules were internalized by the cells and started to degrade within sixteen days after subcutaneous injection, indicating that LbL microcapsules made from degradable polyelectrolytes would be suitable for drug delivery.

In this short review, we have briefly introduced several aspects of the LbL method involving biomaterials. Its mildness is one of its most pronounced characteristics and makes the method applicable to delicate biomaterials. Its other features of simplicity and versatility are important for the performance of gentle fabrication procedures. The LbL method can be combined with existing top-down microfabrication and nanofabrication strategies.20 The simplicity of the LbL assembly method makes it compatible with microfabrication techniques such as photolithography, ink-jet lithography, and other patterning techniques for adaptation to a wide range of purposes. Fusion between the LbL method and top-down fabrication methods will lead to the integration of biomaterials into microfabricated structures and result in the next generation of bio-nanodevices and ultrafine biodevices, for example biosensor microarrays and micro-tip reactors.